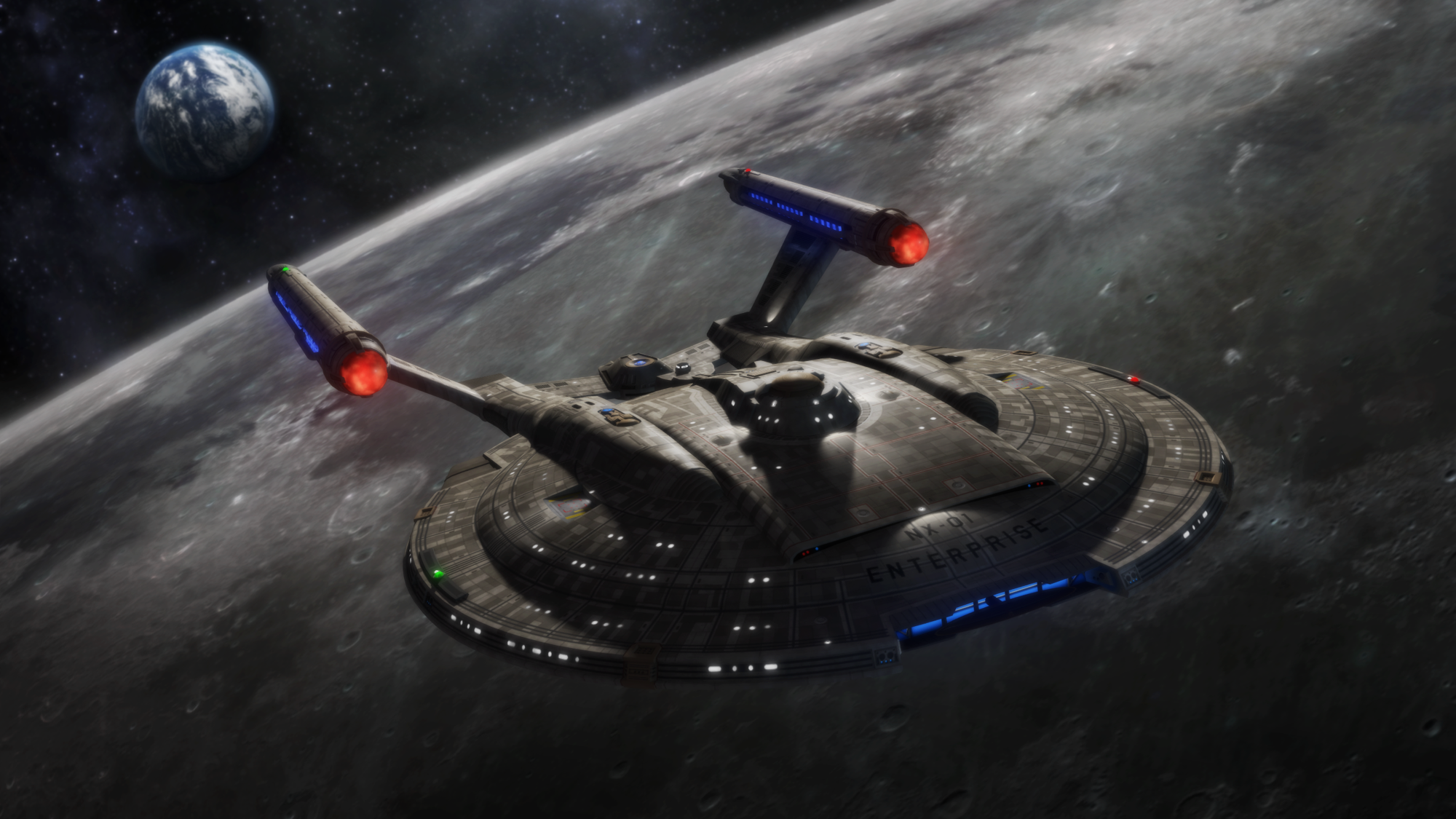 The NX Class is composed of a single saucer shaped primary hull and a secondary hull arranged in a catamaran style. The NX Class is equipped with four impulse engines and two warp nacelles. This layout is similar to the NX Intrepid Class.

The ship’s main impulse engines are housed at the aft most point of the secondary hull sections. Just forward and outboard of these engines is the warp pylon connect points, from these points the the warp pylons extend at an angle upward. These Pylons hold the nacelles above the ship’s hull so that they flank the bridge. The ship’s secondary impulse engines are located along the aft edge of the primary hull outboard of the contention point between the primary and secondary hull sections.

A equipment pod is held by support pylons between the two sections of the secondary hull. The pod can be access via Jeffrey’s tubes from either section of the secondary hull or a aft facing docking port built into the pod. The Warp Field Control Unit along with secondary sensor systems are housed within the pod.

Ships of the NX Class are equipped with four drop bays located in the ventral aft section of the primary hull and two Shuttlepods are housed within two of these bays. Flanking the drop bays are two Inspection Pod bays that house one inspection pod each. These bays have bay doors that face aft. Aft of the drop bays and between the pod bays is a aft facing docking port that is flanked by air locks that allow the crew to exit the craft to conduct EVAs as required.

Ship’s of the NX Class are equipped with twelve phase cannons mounted in storage bays spread across the dorsal and ventral surfaces of the ship’s hull. They are also equipped with six torpedo launchers. For of the launchers cover the forward firing arch and the remaining two covering the aft firing arch. The NX Class was originally designed to carry only the Spatial Torpedo but the torpedo launchers were redsigned to also handle the Photonic Torpedo. To provide the ship with some measure of protection the NX Class is equipped with Hull Polarization systems.

The NX Project was started in 2147 and worked in conjunction with the Warp Five Project. The Warp Five project developed the first warp engine capable of propelling a Earth ship at warp five and the NX Project developed a new class of ship that would make use of the new engine and carry crew on missions of exploration and discovery. The deign of what would be designated the NX Class was finalized in 2149 and Construction on the NX-01, later officially named the Enterprise, was started in 2149. The Enterprise was launched in 2151.

Due to escalating tensions with the Romulan Star Empire and the Xindi attack on Earth in 2153 several modifications to the systems of the NX Class were made. These changes saw the number of Phase Cannons increased to twelve from the original three and the torpedo systems upgraded to handle both Spatial and the new Photonic torpedo. These changes held up the launch of the NX-02 until 2154.

The NX Class proved to be well suited for exploration meeting or even exceeding the expected capabilities of the class. As Earth explored regions of space further and further from Earth the ships were called on to undertake diplomatic missions. Establishing contact with newly discovered civilizations.

The tensions with the Romulans resulted to the start of the Earth-Romulan war in 2156. During the war the NX Class served alongside the Daedalus class during combat missions. Ships of this class were often tasked to patrolling contested sectors of space and were present at most major conflicts in the war. The war was brought to an end in 1560 and the NX Class ships returned to exploration.

In 2161 the United Federation of Planets was formed and the NX Class ships were handed over to the newly formed UFP Starfleet. Under this new flag the NX Class ships continued to operate as explorers until 2185 when the decision was made to retire the class in favor for newer designs. The last NX Class was decommissioned in 2195.