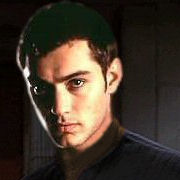 Jeffery Davis Washington was born in 2360 on Earth as the first of two children to Kim and William Washington. His family moved to Betazed after his father took a new job as the director of planetary services. When Jeffery was fourteen years old Betazed was conquered during the Dominion War and that event would play a pivotal moment in his life. During the attempt to remove the occupation forces his father was killed. Eventually the Dominion were removed from the planet after withdrawing back into Cardassian space towards the end of the war.

Jeffery along with his mother and brother Henry moved back to Earth in 2376 after the war had ended and following the reconstruction of the planet. Two years later he applied and was accepted to Starfleet Academy for weapons and defensive systems. In 2380 during his sophomore year at the Academy he met a young woman named Cassidy who was a civilian and going to school for biology. In 2382 they got married just before he graduated the Academy

He graduated in 2382 and was promoted to the rank of Ensign aboard the USS Iwo Jima. In 2383 year Cassidy and him had their first and only child a daughter named Arika. Just before he left on assignment feeling that it was safer his wife and daughter remained on Earth. During an engagement with a rogue Klingon ship in 2383 he and a group of officers were captured by the Klingons.

Ensign Washington escaped from his captors and managed to wreak havoc all across the ship disabling it long enough for the Iwo Jima to catch up and leave the Klingons a black eye. The Klingon Empire later disenvowed the event as an act of treason and executed the surviving Klingons from the ship. Washington was promoted to the rank of Lieutenant Junior Grade and assigned as the ship’s Assistant Chief Tactical and Security Officer since the previous one was killed in the engagement.

During an assignment in 2386 in the Raeyan Transit Corridor the Iwo Jima was escorting some Romulan ambassadors in order to discuss a new trade agreement when the ship was attacked again by Klingons. Jeffery was wounded in the engagement, but managed to kill two Klingons during an intruder event on the ship. He was able to save several lives by holding the attack party off long enough for tactical officers to reinforce his position. He was given several awards for dedication and valor in the brief conflict. He was also given a purple heart from his injuries and a Christopher Pike Medal of Honor for his selfless acts.

Three years later in 2389 Jeff was reassigned to the USS Onnar as the Chief Tactical and Security Officer. He was promoted to the rank of Lieutenant upon his taking of the position and, with the ship being assigned to a long range science mission that would cover several years he talked to his wife. Both decided to move the family to the ship and sell their home on Earth.