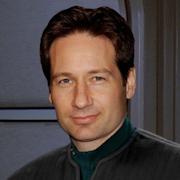 Stephen O’Malley was born in 2343 to Alana and Monte O’Malley he is the second born child in their family. Stephen has one older sister named Phoebe and a younger brother named Jack and a younger sister named Krystal. When he was ten years old while the family was vacationing in Hawaii there was a major shuttlecraft accident that caused the death of his father and both of his younger sisters were severely injured.

From then on he focused on the medical sciences with the intentions of becoming a doctor when he was old enough. Upon turning seventeen years old Stephen chose Starfleet as his career choice and started his pre-medical degree there. He earned his Medical Doctrine in 2368 and met a young woman named Lauren. Two years later he married her before completing his medical residency at Starfleet Medical Headquarters.

He was promoted to the rank of Lieutenant Junior Grade and assigned to the Olympic class starship USS Blackwell as the deputy Chief Medical Officer. After three years of marriage the Dominion War broke out in 2373 and Lauren went to live on Earth where it was safer. The Blackwell saw limited front line action throughout the war primarily focused on medical transport of those wounded in battle.

Stephen distinguished himself on several occasions throughout the duration of the war saving multiple lives and earned several awards for valor and distinguished service to the Federation. At the end of the war he was promoted to the rank of Lieutenant and transferred to the USS Amundsen as the ship’s Chief Medical Officer. Lauren came aboard and soon thereafter she was pregnant with a child. The Amundsen worked as deep space exploration vessel as the Federation and Starfleet had returned to a mission of peaceful exploration.

Later that year Stephen and Lauren had a daughter named Adriana who stayed with them aboard the Amundsen. After completing a three year mission between 2380 and 2383 the vessel returned to Federation space to undergo some refit work at Utopia Planitia Shipyard. That same year O’Malley was promoted to Lieutenant Commander. And, in 2387 Lauren died unexpectedly when the shuttle she was aboard was destroyed in an accident leaving Stephen as a single father.

He considered resignation following the death of his wife after finding out that she was pregnant at the time with what would have been their second child. Instead his twelve year old daughter, his mother, and his siblings managed to talk him into remaining in service. And, in 2389 after discussing it with his little girl Stephen decided to take up the position of Chief Medical Officer on board the USS Onnar.