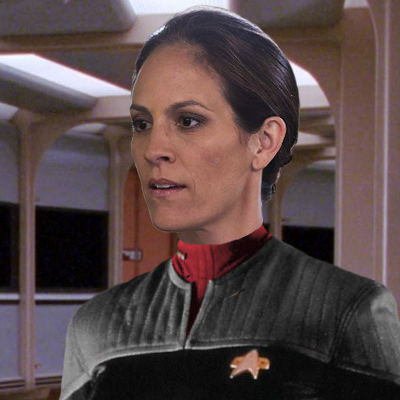 A veteran of several conflicts, including the Dominion War, Commander Jalel is placed in charge of ensuring the Palatine's scientific mission is protected with both diplomatic and tactical command.

Merzia’s mother, Awisa, was an accomplished competitive sunsailer, including winning the 2345 and 2346 Kotil 7-Orbit Invitational. It was during a pre-race interview that she met her future husband, Socen, the one of the journalists conducting the interviews. Despite both being genetic bonded to future spouses in Betazoid tradition, they eloped, spurring a minor scandal in Betazoid society.

Much of Merzia’s childhood was spent around her mother’s yachts, and joining Starfleet felt like a natural progression. Following her graduation in 2371, she was assigned to the Excelsior-class USS Cloudwarden, first as a shuttle pilot then as a flight control officer. Though initially begrudging the old design’s limitations, she came to regard them as a challenge to see what could be done in spite of them, and in 2373 was instrumental in developing several adjustments to the design that increased its top speed by 1.5% and would further lengthen the class’s service life.

Through much of her career on the Cloudwarden, Merzia saw combat on the frontline, first in the Federation-Klingon War of 2372-73, then at the Battle of Sector 001, and finally in the Dominion War. As part of the Second Fleet, the Cloudwarden was part of the effort to retake Merzia’s homeworld of Betazed from occupying Dominion forces. During the second of those counter-attacks, the Cloudwarden was crippled and her crew forced to scuttle her and abandon ship. Unfortunately for Merzia, the people who picked up her escape pod were not from Starfleet, but the Dominion. She spent most of the next year as a prisoner of war on Cardassia.

After a period of rehabilitation, Merzia accepted a new posting to the Cheyenne-class USS Dubochet, again as a flight control officer. Her first taste of command came in 2377, when a first contact situation gone wrong left her as the ranking officer on the bridge. She handled the situation well and managed to salvage relations with the foreign culture, the Chentormerane. Shortly afterwards, she received a promotion to Lieutenant Junior Grade and the position of Assistant Chief Flight Control Officer.

With the beginning of operations of Task Force 47, Merzia was offered the role of Chief Flight Control Officer on board the Akira-class USS Enlil in 2381. During the years that followed, she was mentored by the Enlil’s XO, Commander Sentak, the self-discipline he taught her helping her overcome some of her past demons. Though there were concerns among the command staff that her past experiences on Cardassia might sway her during diplomacy with the Cardassians and Romulans, she demonstrated that she could put those past troubles somewhat behind her, believing that the true monsters were the Dominion, and the Cardassian people were as much victim as the Federation.

When Commander Sentak was offered command of the USS Cormorant, Merzia was a natural choice for Captain Alfaro to choose to step into the role of XO, getting promoted to Lieutenant Commander along with the position. Between them, they did a lot to help the communities as a peacekeeping force within the Gavarian Corridor, but ultimately the return of conflict between the Romulans and Cardassians ended that. When the Enlil was reassigned to the Raeyan Transit Corridor in 2388, Merzia was disappointed, believing that none of the three powers would benefit from a Federation withdrawal from the area. This was replaced with relief when the Gavarian Exploration Agreement was signed and Starfleet Command approached her with the offer to command the USS Palatine.