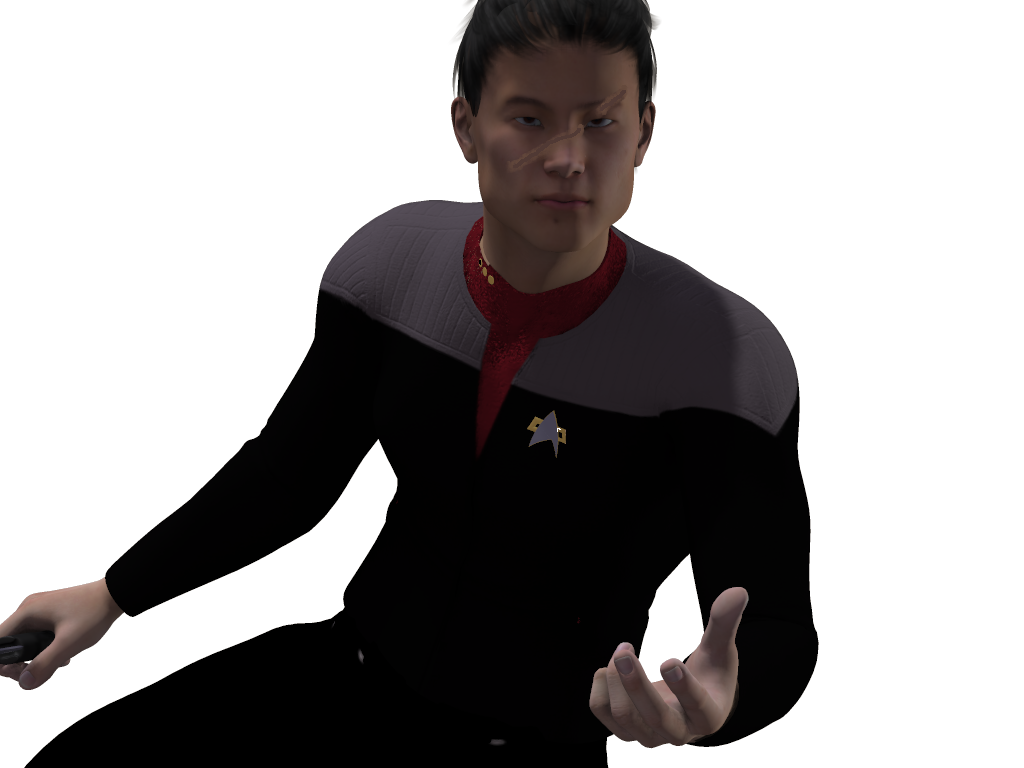 Drakur has finally left his "retirement" as an Academy instructor to rejoin the fleet as the Executive Officer of the USS Endurance.

Drakur was born on a small planet called Salvum to loving parents that raised him well. He was a farmer by trade, but he was strong and sharp witted as well. He trained in weaponry outside of his work, favoring a katana over anything else. After turning sixteen, he began to explore the area outside of this village. He learned the woods and the streams that surrounded him as well as his own home village. It was in these explorations that he met a girl his on age named Karana. They spent many hours together exploring the wilderness.

After another two years, Karana and Drakur got married. They lived in his parents\’ home, as was the custom in his village. They grew closer and closer with each passing day until a roving barbarian tribe changed everything. Drakur lay with his wife in bed when the alarm bells in his city started ringing. Drakur leapt to his feet, grabbing the katana under his bed. He started for the door, stopping to wake his father. He told his father to protect the house while he defended the village.

Drakur ran outside, killing several of the invading enemies. As the barbarians began to break, he ran back to his own house. As he walked in the door, he found his wife dead on the ground and his father nowhere to be seen. He cursed loudly to the stars when the man who had killed his wife stepped forward. Drakur fought the barbarian with all of his strength, but it wasn’t enough. The barbarian beat him back and slashed at his face, giving Drakur the scar he now bears today. He fell to the ground, but the barbarian didn’t kill him. Instead, he left.

Drakur staggered from his home to find a man in a Starfleet uniform standing there. Though they were violating their own laws, they couldn’t stand by and watch so many people die. They treated his wounds and told him about Starfleet. Drakur asked to join.

Drakur spent two years learning the basics of what he didn’t know about technology and Starfleet. He then spent four years in the academy, studying general science. He joined the Starfleet Marine Corps afterwards.

Drakur’s first assignment was to the USS Devestator, as a Marine Executive Officer of a small contingent of marines under the command of Tom Bertlos. He served there, receiving a promotion to 1st Lt. The Devestator was badly damaged in combat and subsequently decommissioned, but the name was transferred to another vessel of a different class. After that upgrade, Drakur received another promotion to Marine Captain.

Drakur’s MCO, Maj Bertlos, recommended that Drakur move on and command his own unit. To that end, Tom recommended Drakur for transfer. Drakur received his transfer orders to the USS Relentless as the MCO. He commanded a small contingent of special operations marines on board the Defiant class vessel, engaging in several skirmishes with rogue klingon elements.

Drakur received transfer orders and found himself on a Starbase, SB909. He served there as the Marine Commanding Officer for several years, receiving his promotion to Major during that service. Drakur\’s CO there saw potential in the marine and recommended him for command of a vessel, provided he crosstrained into Starfleet.

Drakur transferred to Starfleet, holding the rank of Lt. Commander. He was granted command of small ship, the USS Pathfinder. He was promoted to Commander just after its launch. On its first mission, it simply stopped communications. Upon investigation, the ship was found unharmed with only Drakur aboard. Drakur was taken back to Earth to answer for the loss of his crew. He could not remember what had occurred at all, but all scans showed that his brain was functioning normally with no noticeable tampering. Drakur received a two-rank demotion to Lieutenant for conduct unbecoming, but no criminal charges were ever brought. According to everything, he was telling the truth after all.

Drakur transferred back to the Academy after that, preferring teaching (as that held little chance of a recurrence of what had happened with the Pathfinder). After another year, he found that he needed something more; he wanted to be out amongst the stars once again. He applied for a position as an executive officer, hoping to ease himself back into the thick of it.