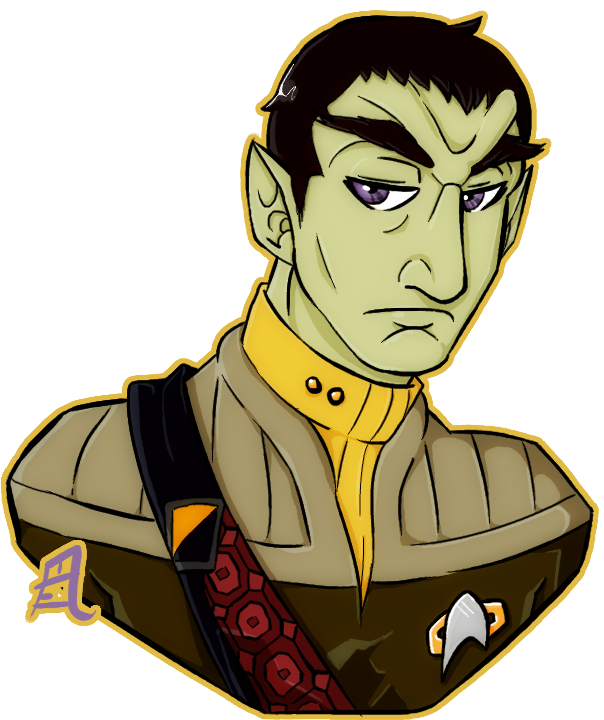 A displaced Romulan brought into the ranks with the officer exchange program. Bancleex lost everything he had in the empire many years ago and since then has been looking for a new home, which he has found. Now married to a human civilian named Athena he know finds that his loyalties have shifted. Though he doesn't hate his former empire it just doesn't have the polish it used to. Though he still finds himself running into the occasional hateful human Bancleex tries not to let it bother him, instead blaming it on their flawed humanity. Such simple creatures after all, but luckily for them Bancleex now fights on their side even if a war were to break out he has picked his side.

Thimak was born nearly a century ago on Romulus. The Bancleex clan wasn’t the most powerful on the planet, but they weren’t the weakest either. In fact the family had many decorations for their service to the Empire, and Thimak was expected to follow in those footsteps. He had a sister that was raised with him and they both were instructed in a typical Romulan fashion. They could deceive, destroy, take, kill, whatever it took for them to get the leg up.

The two grew close in their childhood, more best friends then siblings, Tanuna was so very important to Thimack. The one person he knew would never betray him and he could never betray her. She was someone who always had his back forever.

They both joined the Star Navy and Thimak slowly rose in rank in command, taking action in situations against many different opponents, some even a part of the Federation. He was paramount in his belief in the Empire and he would risk his life for it. His sister to was committed to her empire and for her children. She had married young and had two sons, both grew into gifted officers in their own right.

The Dominion war took much away from Thimak, he had risen to Commander and Tanuna was Subcommander aboard another ship. The war was rough on the Romulan Empire with the loss of life and ship. Tanuna and both of Thimak’s Nephews didn’t come home, they were casulities in a war, a war of mistakes and secretive sabotage. The whole debacle was a disgrace to the empire and Thimak felt that in his bones.

There wasn’t much left for him on Romulus, he felt alone and being there only reminded him of what was now missing. His Empire had failed him and his family, and so when he could he Joined the officer exchange program, he gave up his command to do so. He would bounce from assignment to assignment preferring not to return to Romulus, not once in ten years.

During his time within the ranks of Starfleet however, he has found something that also keeps him attached to the Federation. The love of his life, his Athena, possibly the strongest, toughest, and ornery women he had ever encountered. Surely she would give any romulan a run for their money, klingon too. Past that exterior there was a sweet core within her, Thimak was smitten and married her nearly three years ago after courting her for some time.