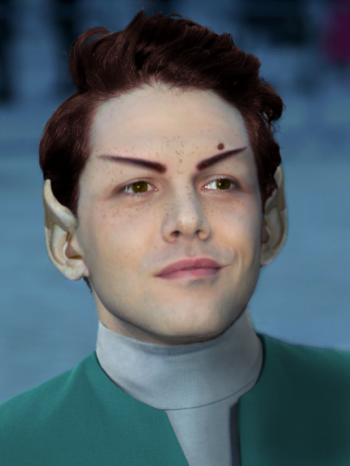 Currently transferred to Ent to further expand his studies in xenobilogy and genetic. Grew up on the outskirts of vulcan to parents Silar and Huern . Holds a degree in xenobiology and genetics from the VSA .

He comes from a middle class family from the outskirts of the city , his parents Silar (father ) and Heran (mother ) are biologists specializing in animal and plant genetics. Silar in the VSA as a lecturer and Heran currently involved in a sehlat rehabilitation and breeding programme . He is an only child , has great appreciation for both plants and animals , with several species of earth and vulcan cactus in his room . He joined starfleet as he thought it would be fascinating to be able to study newly discovered life both in space and on new planets . He has a degree in Xenobiology and chemistry ,which he earned at age 17 . He has a sweet tooth which he never grew out of but shhh. His parents were somewhat hesitating to accept his application to starfleet but due to his quiet (even for a vulcan) demure thought the experience off planet would be highly beneficial

He is however curious and eager , as most are, which gives him somewhat of a round eyed look upon new things . He can be shy and tend to hold things back at times ,something his instructors often noted . Like most , his stoical manner might make him seem brash but he can slip up the odd time , much to his dismay but all in all he’s just delighted to be out exploring . (Something he did very young as a child and would often turn up home with a new fauna demanding to keep it for “research purposes.”)
photo credit to oldcountrydoctor on tumblr