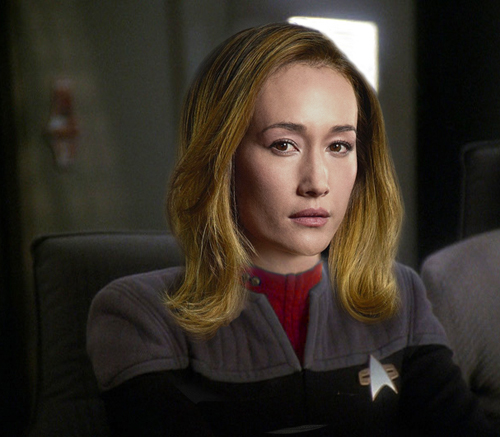 A petite woman of five foot six inches tall and 111 pounds of weight, Meghan Quinn is a young and attractive woman. Her emotion filled brown eyes are well accompanied by full, pale red lips and brunette, layered hair making her almost identical to her mother at a similar age. She keeps her petite frame in peek condition through regular physical exercise.

The Quinn’s happily welcomed a beautiful baby girl into their family on July 10th, 2346. Meghan was the only daughter of Admiral Bryan Quinn and Sarah Quinn whom christened her as Meghan Ruby Quinn, with Meghan being after her paternal grandmother and Ruby as she was born in the month of July for which Ruby is the birthstone for the region her mother is from back on Earth.

Meghan’s father was a highly decorated Admiral in Starfleet and would often be on duty and miss out on significant and important events in Meghan’s life. However her mother was always there, always supporting her.

On the rare occasions the Admiral could stay home, he spoiled her and spent every minute that he could with his family. Meghan grew up understanding that her father’s work was important and was what kept him away, and not because he didn’t want to see her. Her parents had managed to make her feel loved, always.

Her father, the Admiral told her about the importance of family whenever he could and would recount stories about his parents, and theirs and so on, all the way back to the Quinns’ whom survived the third world war on Earth. Meghan relished those stories. As she was the only Quinn of her generation, he imparted unto her the importance of continuing their family line, how the family is of survivors and it would be a loss to the galaxy if there were no more Quinns’.

As Meghan grew, she did so a little slower than the girls around her. At school she would often be teased about not being as tall as them. She would often come home in tears and need comforting from her parents. Those events have generated a resilience in Meghan to joining in large crowds of people.

When Meghan reached Secondary school she was growing and finally reaching the heights of the girls around her and learned she was, ‘A late bloomer,’ which something her father said. With that her ability to socialize became easier and she began to make friends, though she still hated large groups. During her Secondary and High School years, she got her first shuttle piloting license and from thereon was addicted to flying. Meghan found she is most comfortable behind the helm controls of any craft, she doesn’t care what it is as long as she can manipulate thrusters and do barrel rolls.

She had decided from a very young age that she would follow in her father’s footsteps and join Starfleet when she would able to honor him as well as to fly something other than shuttlecraft. During her Secondary and High School years she focused heavily on study, only occasionally socializing. But despite this lack of social activity, she still found that she rather enjoyed hangin out and made very close circle of lifelong friends.

Meghan graduated from High School in 2363 with a strong 3.8 GPA though they were not the highest marks they were enough to grant her admission into Starfleet Academy without incident.

Starfleet Academy During her time at Starfleet Academy Meghan enrolled in the Command division and Flight Ops, she received several notable citations for her Piloting abilities and for understanding Historical Tactical Data, with which she wrote several reports on how historical telemetry data can be used and applied to modern use. Most notably is a excerpt from her report on Romulan Battlecruiser Movements, in which reads,

‘Modern Romulan battle movements show a shared consistency between the D’Deridex Warbird and the 23rd Century T’liss class, both vessels appear to suffer from a kinetic drift when moving at High Impulse speeds that must be corrected by a strong thrust in the opposite direction in order to maintain course. Despite the two vessels differing overall mass size. I propose this shared drift is instead a result of Romulan power and propulsion systems, IE Quantum Singularities. The inclusion of this drift pattern into Starfleet computer banks could cause a base increase in accuracy when targeting Romulan vessels should the next Romulan class ship prove this theory correct by having a similar kinetic drift while also utilizing a artificial Quantum Singularity power source.’

This above report was one of many that saw Meghan excel rapidly in the Command department and into Strategic Operations. There she learned key methods to extrapolate, translate and relay large tactical engagement data, how to prepare vessels and installations for specific threats and how to mobilize and deploy Federation assets across large theatres. It surprised no one that the daughter of Admiral Quinn was a natural at this and so she earned various recommendations for Command School

Meghan graduated in the top of her class out of Starfleet Academy in 2367 and then attended Command school at the behest of her professors and course advisors. She was finding she had a knack for Strategic Ops, owing much of her success to the tactics and maneuvers that to the stories her father used to recount to her when she was young.

She passed Command School but was not the top of her class owing to her failure to understand the Kobyashi Maru examination as well as failing to delegate a potentially lethal assignment to her crewman in a simulation and instead doing it herself. She graduated while wrestling with these concepts and received lower grades because of it.

Post-Starfleet Academy
2368
In 2368 Meghan’s first assignment was aboard the USS Sulaco, a Saratoga class starship patrolling the Federation core worlds. She was an Ensign assigned as a Signalman responsible for ensuring the safe landing and departure of all craft in Shuttle bay One. She received citations for never being late and always completing her duties before her shift ended. During her time off duty, Meghan continued to practice her Strategic Data analysis skills and submitting proposals and conclusions she felt could improve Starfleet’s odds in a tactical engagement

Meghan was promoted to Lieutenant Junior Grade one year later in 2369 where she was assigned as a Flight Control Officer and held that station for two years until 2371 where she was promoted and transferred. The Sulaco was a relatively boring assignment with no notable events outside of the usual policing required in the Federation core sectors.

Meghan was promoted to Lieutenant after serving aboard the Sulaco and transferred to the USS Highlander, a Nebula Class starship assigned to exploration of the Hermes cluster. Aboard the Highlander she remained a pilot but was given additional duties of coordinating flight plans and submitting forms for shuttlecraft servicing to the Engineering Department.

During her first year aboard the Highlander, through her consistent and stellar delivery of her duties, Meghan was made Assistant Chief Flight Operations Officer as she had proved invaluable to the current flight chief.

In 2372 the Highlander encountered an unknown enemy and received nearly mortal damage but managed to slowly limp away under her own power on a three month voyage to the nearest Starbase where she was then towed to a repair yard. The majority of the Senior Staff had been lost in the engagement, including the CO, XO, COPS, CFO, CMO. Meghan received a special commendation for utilizing the ship’s shuttecraft complement as remote drones which through a cunning plan developed with help from the Chief Engineer and another Pilot, she remote piloted the shuttles into the enemy aggressors hull as if they were small warp core filled torpedoes. She was also credited for making a command line decision in which she ordered one of her peers into a dangerous situation, the crewman was lost but they completed the task and enabled the team to save the ship.

Two years later after participating heavily as a Tactical advisor in the rebuild of the Highlander, Meghan was assigned as a Chief Flight Operations Officer aboard the Highlander and promoted to Lieutenant Commander. Though not a normal rank progression track, it was however felt that her actions showed she was a capable command line officer who understood some of the most crucial intricacies of command, adding to that her lineage, it was considered an appropriate move by Starfleet Officials.

After her large leap in rank, Meghan felt things had slowed down for her while in Flight Ops but she stayed the course for four years until a replacement CFOO could be found, as time went on she began to feel more compelled toward the Strategic side of Command. When a suitable replacement was found she requested a transfer and was approved.

Meghan had been transferred as Assistant Strategic Operations officer for Outpost 112 where she was responsible for aiding the CSOO with coordinating ships and assets along the Romulan border.

After serving Three years in her role as ACSOO she was then transferred to the position of Chief Strategic Operations Officer aboard the USS Ulysseys. While aboard the Ulysses.

2385-Current
Meghan served in her role as Chief Strategic Operations Officer for three years until she was promoted to Commander and assigned as Executive Officer by the Captain of the Ulysseys, Colby Drayton.