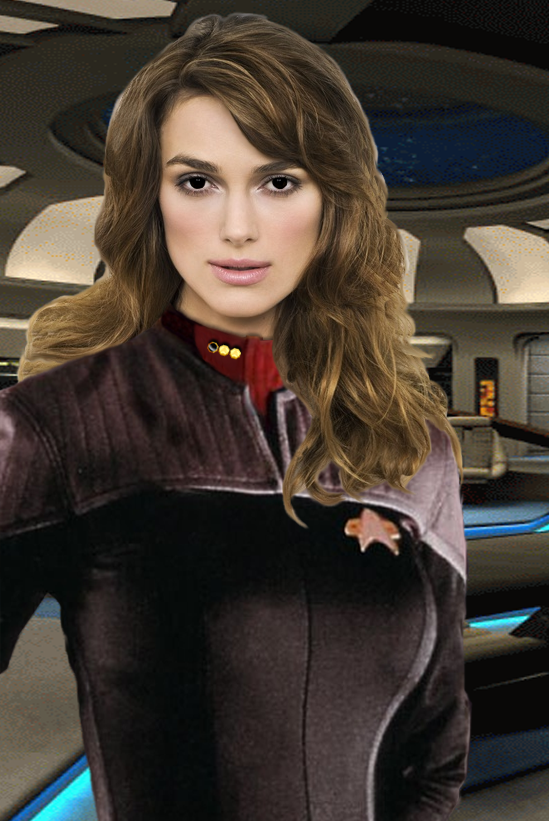 Jaesivi Egein is a friendly Betazoid woman who enjoys getting to know her crew off duty. While on duty however she is very serious and keeps a professional, but slightly informal, attitude. Jaesivi is an explorer and scientist at heart and has a passion for discovery. She has an inquisitive mind, always wanting to know more, and this has served her well. Jaesivi is a short Betazoid woman. She has brown hair which she keeps relatively short, and black eyes.

Jaesivi Egein was born on July 18 2354, Terran Calendar. She grew up on Betazed and did very well in school where her thirst for knowledge was awakened. As she grew up Jaesivi decided that the best way for her to learn more was to join Starfleet, and in 2374 she started at Starfleet Academy. Four years later in 2376 she graduated as a Science Officer.

Jaesivi was assigned to the Nebula Class USS Lusitania under the command of Captain Vylaosh sh’Ekyhlihr. The USS Lusitania’s first mission was a five year exploration mission, which Jaesivi loved. She thrived, there were numerous scientific experiments and planetary surveys which Jaesivi participated in, and in 2381, upon the Lusitania’s return to federation space she was promoted to the rank of Lieutenant JG.

Jaesivi stayed aboard the Lusitania and in 3283 she was promoted to the rank of Lieutenant, and made the Assistant Chief Science Officer. She worked harder than ever and her effort payed of when she was promoted to Lieutenant Commander in 2384 and made Chief Science Officer of the Lusitania, after the previous chief retired. As CSO Jaesivi excelled, her department ran smoothly and effectively, earning her another promotion in 2386.

The promotion came only with a change of department and ship. Jaesivi was transferred to the USS Neoptolemus, an older Excelsior class vessel, under the command of Captain Orian Carr. Aboard the Neoptolemus, Jaesivi met a new style of command. Carr kept himself very distant from the crew, so it often fell to Jaesivi to act as an intermediary between him and the junior officers. She did well and the Neoptolemus ran as well as she had the day she had been launched.

In 2389 Jaesivi was given command of the Cardiff Class vessel, USS Endurance.