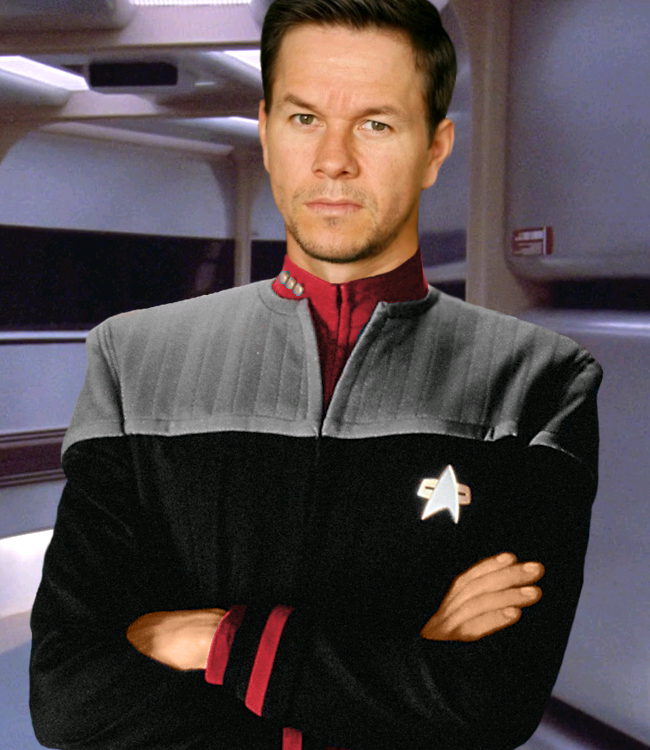 CMDR Kendrick Rockford know as Ken, The Rock to his friends currently hold the rank of CMDR. Kendrick's last assignment was aboard the USS Washington one of the last Endevour Classes vessels to be serving; where he served as the ships XO for last 3 years. He was promoted to full Commander last year just prior to the Washington's decommissioning which was quite the disappointment. His new orders have brought him to the Delta Quadrant where he still awaits an assignment.

Ken attended grade school, and high school in Missoula, but he longed for something more than running the same old rapids. Taking tourists and students on what they thought were thrill rides, even though Ken thought of them more as annoyances to doing the things he wanted to do.  It did get him out into nature, and he really did love being out on the water every chance he got; but something just didn’t feel right about staying around Missoula for his entire life.

In 2367 right outta high school Ken applied to Star Fleet Academy, he gotten the idea after talking with recruiters who had come to his high school his junior year.  He’d stayed strong in his academic in high school which made his application that much more appealing, not quite scholarship material but he thought it’d do.  He figured if he didn’t make the cut for Star Fleet Academy he’d go enlisted, after all he didn’t really care where he was as long as it wasn’t Missoula. He tested with many kids a couple of years young than he was, and for the first time in his life he actually felt old even though he was barely 18.  At their age he didn’t know what he wanted to do with his life at that point.  Most of his thoughts at 15 and 16 were those related to the chemical imbalances and changes his body was dealing with as he matured into a sharp looking young man.

Ken passed his entrance exams with more easy than he had expected his scores came back much higher than he had anticipated.  He quickly accepted his offer to begin classes in the Fall of 2367.  He said good bye to his Mom, Dad and his High School Sweetheart Jenna and headed off to San Francisco in September of that same year.  His 4 years at the academy flew by, he had majored in Flight Operations with his area of study being study being Ship Operations, and Political Science.   He was an above average cadet but certainly not at the top of his class.  He’d always been an adventurous soul, and sometimes his adventures would effect his grades; either from being to busy on adventure to get his homework done, or sometimes playing hookie from class.  Over all he graduated in the top 10 percent of his class in the spring of 2371.

After a small hiatus in Missoula to see his parent, and say good by to Jenna even though their relationship hadn’t lasted much past his freshmen year they still remained close.  Ken reported to his first posting in the late summer of 2371 on Deep Space 9, he wasn’t exactly thrilled.  He’d though he’d be at the helm of an Intrepid or Sovereign Class vessel, the picture of him sitting at either one of those helms look fantastic in his mind, but the Runabout Yakima would have to do after he in command of his very own ship; no matter how small.

Things didn’t stay quiet for long; within 2 years of being assigned to Deep Space 9 the Dominion War touched off in 2373.  Ken remained aboard Deep Space 9 until the winter of 2374.  He’d been on a supply run to the Delvin Colony on Delvin II near Dominion held space, attempting to deliver medical supplies and rations to the settlement which had been a repeated target of Laget Kemar, and Gul Crelok. Gul Crelok’s warship intercepted Ken’s runabout and he was able to make it to Delvin II, but not before taking extensive damage from Cardassian weapons.  The Runabout (USS Yakima) was destroyed but not before Ken was able to beam himself and most of the supplies to the surface.  The Cardassians had reported the runabout and it’s crew had been destroyed in the skirmish, and Ken assumed they believed it.  They easily could have beamed down and taken him prisoner.  He was later rescued by Romulan Forces shortly after their alliance with the Federation and returned to Deep Space 9.

After returned to Deep Space 9 Ken received a promotion to Lieutenant Junior Grade, and transfer to the USS Wilhelm where he served as Flight Operations Officer.  The Wilhelm saw many battles during the remainder of the Dominion War and was ultimately abandon in the Chin’Toka System after taking heavy damage.  Once again Ken was transferred back to Deep Space 9 after the Dominion War where he was assigned a Diplomatic Role.  Mostly the kind where you wine and dine various Dignitaries from across 2 quadrants.  He made good connections there and it help him pat his resume, he filled this role so well he was denied transfer on 3 different occasion due to his relationship with many of the dignitaries be of utmost importance.  Many of them asked for him specifically, and at times refused to attend summits, conferences and meetings unless Ken was involved.   Though he enjoyed his diplomatic position he longed to be free.

On Christmas Eve 2381 Ken had hoped Santa would bring him the gift he’d longed for for just over 2 years.  He received new orders to report to the USS Wabash where he’d server as 2nd officer and Chief Flight Operations Officer.  He also received a long over due promotion to full Lieutenant.  He excelled on the Wabash and Captain Holbach recommended Ken for promotion to Lieutenant Commander and without his knowledge a transfer to the USS Washington to server as her first officer after 5 years aboard her.  Ken accepted graciously when all was approved and Holbach cornered him in his ready room one day about it.

In 2386 stepped aboard the USS Washington as her first Office, he hadn’t been looking forward serving under a Vulcan Captain.  He and Captain Tarkar quickly became close.  Ken looked up to him, he was a decorated StarFleet Officer.  He’d been in space since Ken’s Father was in diapers and he had learned much from the Vulcan man.  The Washington one of the last Endeavor class starships to be in service was recalled to Earth in March of 2389 where she was to be decommissioned.  The ceremony had been a tear jerker for Ken.  Many of the thousands of men and women who had severed aboard her were present when she was finally shut down and towed to the Utopia Planitia Fleet Yards to be mothballed.

Ken was reassigned to Task Force 38 and currently awaiting assignment.