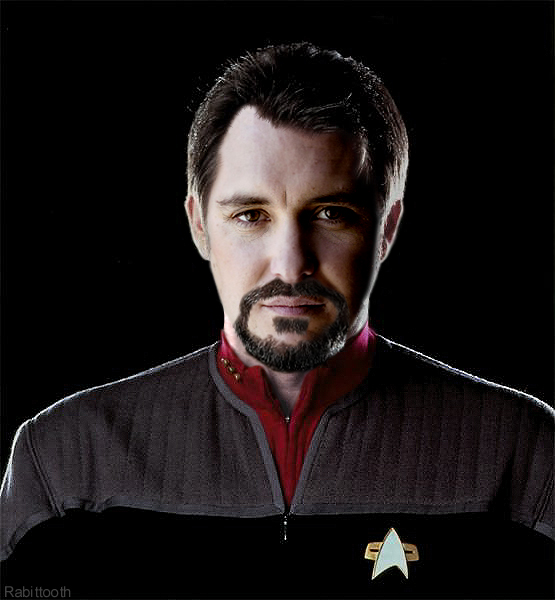 Jim McCullen is a career Starfleet officer. He entered Starfleet Academy straight out of high school and has served ever since. He met, wooed and married his wife, had six children and three dogs, all while serving in Starfleet. After seeing the last of his children out of the nest, Jim decided it was time to step up from being executive officer, a position he'd held for nearly six years, to command of his own vessel. With a background in tactical and strategic operations, Jim has been on the front-lines of Starfleet's recent conflicts for most of his career and has earned a reputation as a steadfast, reliable man to have around. Steady in a fight, cool in a pinch and on top of his crew.

James ‘Jim’ McCullen was born on October 10th, 2330 at the Royal Infirmary of Edinburgh in Scotland. From a young age, he was encouraged into physical sports, martial arts and team sports. His parents did not work, having retired young, and he spent endless hours playing board games and having holodeck adventures with them.

Jim was academically average, not the brightest kid in the class but on-par with the expectations of his teachers. He was, however, often one of the most popular students in school, with both staff and students. His easy charm was evident, even as a child.

From middle school onward, Jim began his obsession with space. It had started with meeting a particularly charismatic officer who had come to his school to give a talk, then Lieutenant William Riker. When Jim graduated from high school with a 3.9 in 2348, there was never any question in his mind where he would go.

Starfleet Academy was not an easy environment for the young man to adjust to. In high school he had been able to get by with a little bit of work and a lot of charisma, but the academy professors were not so easily impressed. While the physical aspects of the courses were a breeze, the academic rigor pushed him as he’d never been pushed before.

In the fullness of time, Ensign James Griffin graduated from Starfleet Academy and in 2352, was assigned to the USS Burnside, a clapped-out old Constellation class on border patrol. It was here that he met his wife, also an Ensign, Elizabeth Cutter. They fell in love quickly, were married by the captain eight months later, and were expecting their first child after just one year.

Their first child turned out to be twins, Jenna and James Junior. Despite having twins, both continued to work. In 2355, James and his family were transferred to the Ambassador-class USS Othello where he served as a tactical officer. In 2357, the Othello engaged in a skirmish with three Cardassian vessels and damaged. Over the course of an hour, McCullen took the lead in fighting off several Cardassian boarding parties. For his efforts, he was promoted to Lieutenant Junior grade and commended for decisive action. In 2359, he and his wife also adopted two more children, Kevin and Lisa.

In 2360, James and his family were transferred to the Galaxy-class USS Venture and he was promoted to full lieutenant. Aboard the Venture, he served as the assistant chief tactical officer. During this period, the Venture was on a series of scientific missions and he saw little action. This was, in a way, good for him and his family, as he got to spend more time with his kids.

In 2365, McCullen was assigned to the USS Ahwahnee, a Cheyenne class vessel. In 2367, the USS Ahwahnee was involved in the battle at Wolf 359. The only ship besides the USS Enterprise to survive, she was heavily damaged. Luckily, the children were left on Earth and both Jim and his wife escaped relatively unharmed. Jim received special recognition and a commendation for his rescue of fifty seven of the Ahwahnee’s crew by sealing himself, and them, in a cargo-bay that happened to be filled with magnesite.

After the incident, then Lieutenant McCullen was transferred yet again to the USS London, where his wife, Lieutenant Commander Elizabeth McCullen, was the executive officer. He served on the London for a further eight years as first assistant and then the chief tactical officer and producing a third pair of twins, Charles and Brie.

In 2375, the USS London was involved in the battle of Cardassia, where she was disabled and heavily damaged. The crew was forced to evacuate and it was four days, floating in life-pods before they were picked up. It was during this time that he and his wife agreed, they would have no more children.

In 2377, after a two-year recovery period, now Captain Elizabeth McCullen was assigned command of the USS Martin, while James was promoted to Lieutenant Commander and assigned to the USS Hightower. It was the first time they had been apart but grew used to it. He served as the chief tactical officer aboard the Hightower.

In 2379, the USS Hightower was involved in an incident involving an undetected quantum filament. The ship was heavily damaged and power lost. At the time, it was assumed that both the captain and the executive officer had been killed and James was forced to take command. Under his direction, the ship managed to escape from the filament’s subspace field and restore enough power to limp, at low warp, back to the nearest Starfleet installation. Shortly after the incident, both the captain and executive officer were found, trapped in a holodeck and unconscious. Subsequently, they recovered and resumed command, but for James, the bug of command had hooked him.

In 2380, James successfully completed the Bridge Officer’s Test and began, with the backing of his captain, applying for transfers to executive officer positions. It took a year of further training and experience gathering before he is successful.

In 2381, James was assigned to the USS Guadalupe, an aging Ambassador class vessel, as executive officer. He quickly established himself as a likable and capable officer and outwardly projected a good relationship with the ship’s captain. In reality, while the two command officers respected each other, they butted heads constantly, James’ laid-back style of command conflicting with the captain’s authoritarian methods.

This came to a head in 2384, when the captain of the Guadalupe ordered the ship to fire, without provocation, on a Klingon vessel. James was forced, with great regret, to assume command and barely averted a mutiny aboard ship. A subsequent inquiry found that the Guadalupe’s captain had been emotionally compromised by the loss of his two younger brothers to a Klingon ship somewhere near the F’hoca Gateway and that Lieutenant Commander McCullen had acted correctly. The captain was court-martialed out of Starfleet and for a short time, James is acting-captain of the USS Guadalupe. James’ bid to retain command of the Guadalupe, however, was unsuccessful and he was transferred to the USS Acheson, retaining his rank and position as executive officer.

It became apparent, through back-channels and informal news, mostly from his wife, that the incident on the USS Guadalupe had given James somewhat of a black mark. Regardless of the validity of his actions, he had risen up against his captain and gotten a reputation as a trouble-maker, disloyal and rebellious. Aboard the USS Acheson, James strove to prove his worth. The captain of the ship, an older man, gave him the benefit of the doubt and James did not squander the opportunity.

He has served five years aboard the Acheron as executive officer and has finally been offered his first command, the Intrepid-class USS Sentinel.