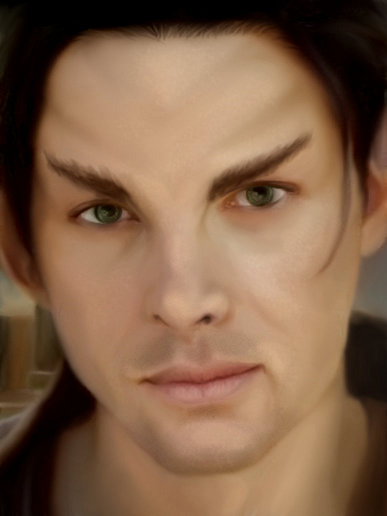 Rodan's spent most of his life researching FTL propulsion, most recently working with Quantum Slipstream technology at the Daystrom Institute. His latest assignment, the chance to test some of his theories and designs out on one the newest ships, he jumped at the opportunity when it was presented to him. 5 years was nothing, it didn't matter where he was so long as he could continue his work. Who knows it might even be interesting to look out a window and see something entirely new from time to time.

Qualor III, the diplomatic experiment, Federation and Romulan citizens living side by side, well sort of… Mostly the Romulans kept to themselves in their own communities. A few however were more adventurous, living in primarily Federation cities, Rodan’s clan was among them, living in Qualor City home to over half a million Federation citizens, and less than a 1000 Romulans. But even here, they mostly separated themselves, like China Town in old Earth cities. Rodan grew up in a small farming community just outside Qualor City, his parents wanting to live surrounded by nature rather than the city, they visited the city often though, most of the clan lived there, and there were many things unavailable in their little town. Consequently Rodan was far more used to seeing and interacting with aliens than most Romulans and his family was unusually open minded regarding them. Additionally, Rodan was bullied as a child by more traditional Romulans, his was a minor clan and their members often lacked the propensity for violence often resulting from Romulan passions. He developed extreme dislike of aggression, violence and deception and withdrew inward, spending much time alone, further isolating himself from the more typical xenophobic aggressive Romulans.

It was in his time alone, that Rodan developed an interest in spacial mechanics and faster than light propulsion and he immersed himself in everything he could get on the subject. From time to time, his father Llhran, a local transport pilot, would take Rodan with him, sometimes letting Rodan take the controls. It was in this way Rodan learned piloting. Likewise, Llhran would often have Rodan assist him, fixing, building, whatever needed doing. Llhran was something of an unofficial engineer and Rodan learned much from him. But while he enjoyed spending time with his father, Rodan always returned to his passion for propulsion theory and design, it consumed him and he’d spent countless hours at it, long before his real career started. Eventually, it became difficult to find any person or resource to add to his knowledge and understanding of the subject. All the current designs were classified, both Romulan and Federation, however old Federation designs and notes were easier to come by. To progress further, he’d need resources, unavailable at present, but the thought of being conscripted by the Navy or under constant scrutiny in a Romulan science laboratory was unappealing. A consequence of life in Qualor City, was awareness of the differences in freedoms of the two societies, and he desired freedom, he was accustomed to it and didn’t want to give it up.

The decision was not an easy one, there were a lot of things to consider, however he eventually submitted his application to the Daystrom Institute College of Technology on Mars. The application process was lengthy, given his unusual citizenship and security concerns, but he was eventually accepted. Moving to Mars wasn’t all that difficult, most of what he considered important was data, and whether home or abroad he mostly kept to himself. Rodan promised to call home, but he was too wrapped up in is studies, usually it was his mom who called him on subspace. He graduated from an accelerated program in just one year, learning little more in his specialty, but rounding out his skills and highly impressing most of his professors. Afterwards Rodan joined the Daystrom Institute’s Research Division on Earth, Department of Warp Propulsion. For his first year, he was under probation, without access to the more sensitive propulsion research and designs. However, he used the time to develop his holoprogramming skills, useful in simulating and testing new designs and ideas, before committing them to live trials.

Eventually, it was determined he wasn’t a serious security risk and doors began to open, and at the age of 23 Rodan’s real career started. In the Earth year 2373 he joined the Daystrom Institute’s Transwarp Research Team. The next 5 years were very interesting, several new theories and technologies from the Voyager mission, brought new life to the research and the team expanded with Rodan at the heart of it all, absorbing, learning, theorizing and designing. This was what he was born for. The next 9 years were very busy, culminating in several experiments of varying fruitfulness. And he divided his time between the Daystrom Institute, McKinley Station and the Utopia Planitia Shipyards on Mars. Then in 2387 the Hobus star exploded destroying several Romulan worlds including the homeworld. Later the Empire ordered the evacuation of Qualor III. Rodan wasn’t particularly close to his Romulan brethren, however he was still shaken by the events, and he took a few months off to visit his family
on Qualor III, most of whom had chosen not to leave their home and were now under Federation jurisdiction like himself. When he returned to Earth, Starfleet Security had some questions for him, but he wasn’t under nearly as much scrutiny as his first years on Earth and Mars, they seemed to trust him now.