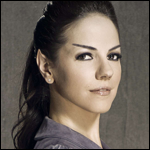 Something of an oddball by Vulcan standards, T'Niam is currently an Ensign with Starfleet and serving as the Science Team Lead Counselor aboard the USS Palatine.

T’Niam was born in 2327 in Raal, a coastal province located on the Voroth Sea on the planet Vulcan. Her family was not of any particular note, working on their ancestral hydroponics farm, and they lived a very simple life. She attended a Vulcan Learning Center to begin her education, and excelled in the biological sciences. Like many Vulcan children, T’Niam was bonded at the age of seven to a fellow Vulcan, a boy considered compatible named Larraq. As they grew, T’Niam displayed aptitudes for medical fields rather than the purely mathematical disciplines and developed a lifelong fascination with the dichotomy of logic and emotion. She decided she wished to become a healer, one who mends both body and mind, and set her mind to the task.

As psychological trauma in a Vulcan can have serious physical consequences as a result of their conscious control of autonomic systems, Vulcan healers do not simply specialise in the psychological aspects of treatment. They also require in-depth knowledge regarding physiology, and as such the first half of a mind-healer’s training encompasses the Vulcan equivalent of a medical degree. T’Niam completed her physician training at the Vulcan Medical Institute, and then moved on to complete the psychological and telepathic side of her training. It took a decade of study to become qualified in that alone, bringing her specialist training to a total of 15 years. She found great fulfilment in her work, though it was harrowing to be in the minds of traumatised Vulcans.

T’Niam was formally bonded to Larraq in 2370, at the age of 43, when he entered pon farr. They had always gotten along very well, and considered their pairing to be eminently logical and gratifying. They considered having children early, but ultimately decided it would be more logical to allow both of them to become truly established in their fields. Larraq was a botanist, and T’Niam found the tranquility of his profession to be soothing. Considering how difficult her work often was and the toll that it took on T’Niam, the peace offered by Larraq and his plants was of great benefit to her. Sadly it was not to last.

In 2374 Larraq was diagnosed with a rare early-onset form of Bendii Syndrome, which was much more aggressive than the standard variant of the disease. After this discovery, T’Niam was deeply dismayed when it was suggested by the physicians – logically – that it would be unwise to have children with Larraq due to his compromised genetics as their lifespan would be dramatically reduced. Two years later, T’Niam took a leave of absence from her career to care for Larraq, who deteriorated rapidly and ultimately died in their home in 2378. Afterwards, she remained with her family to regain her equilibrium mentally and emotionally, as the strain of keeping Larraq functioning and finally caring for him in body as well as mind had worn her down. After this period, T’Niam decided she did not wish to remain on Vulcan. She no longer felt entirely comfortable on her homeworld without Larraq and did not feel ready or sufficiently able to cope with the prospect of telepathic patients, so she sought another way to be of assistance.

After passing the rigorous entry exams, T’Niam enrolled in Starfleet Academy in 2381, and completed the four-year course in 2385, when she graduated with the rank of Ensign. Being thrown into a melting pot of races and cultures was deeply stimulating for T’Niam, and she developed a fondness for her new career and surroundings very quickly. It was the fresh start she had needed to truly begin to move forward. She completed an internship/residency in xenopsychology at Starfleet Medical, which she completed in 2388. At that point she was assigned to the USS Shran as a junior counselor.

A year later, T’Niam applied for the position of the Science Team Lead Counselor aboard the USS Palatine. The Palatine’s mission appealed to T’Niam, and she believed that on a mission of its nature her skills would be both necessary and generally beneficial. The opportunity to study the cultures and psychology of new races was one she could not pass up, and would give her ample subject matter to pursue her doctorate in xenopsychology.