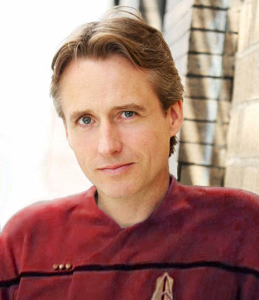 John was Born on April 20th to Dr. George Llewellyn and his wife Commander Margaret Llewellyn. John was named for his two uncles, John David (His father's brother) and his mother's younger brother James. He is a twenty year veteran of Starfleet and highly accomplished and a Veteran of the Thalaron War. In the spring of 2431 John was assigned as executive officer aboard the new Century-Class starship USS Enterprise. Towards the end of June in 2431 Captain Robert J. Weiss, the commanding officer of the Enterprise was taken hostage and rescued. However, the wounds Weiss suffered were far too great. Starfleet made Llewellyn acting commanding officer of the Enterprise and deployed the ship and crew on a fact finding mission within the Epsilon Quadrant...

John James Llewellyn was born go noted Warp Theorist Dr. George Edward Llewellyn and his wife, Commander Margaret Ann Llewellyn, a Starfleet Nurse. He has an older brother and two younger sisters. He grew up around starships and wondered what life was like since his family never traveled outside of the Solar System.

All his life John had been an explorer eager to see what’s beyond the next hill or inside of a cave. His natural wonder led him to join Starfleet.

At the age of Eighteen John took the Starfleet Entrance exam and passed with flying colors. He showed a particular apitude about navigation and flight. His father was a little annoyed that he did not seek an engineering profession but respected his son’s choice.

Upon his graduation In 2412 he was assigned to the Nova Class USS Hubble NCC-72901 as Helm Officer under Captain Sims a Vulcan female. Sims took him under her wing and tutored him not only in the finer aspects of being a better Starfleet Officer but to tape into the potential she saw in him.

In 2415, after three years on the Hubble, Sims recommended him for promotion and transfer. He was promoted to Lieutenant Junior Grade and transferred to the aging Ambassador Class starship, USS Abraham Lincoln as operations officer. He spent two years on the Lincoln earning a promotion to Full Lieutenant and a transfer to the Intrepid-Class starship USS Daedalus as flight control officer.

He remained on the Daedalus for three years before earning a promotion to lieutenant commander and reassigned as second officer on the Galaxy-Class starship USS Reagan under the command of Captain Kenneth West.

After four years on the Reagan, Llewellyn transferred to the PCU USS Enterprise NCC-1701-F to serve as executive officer under Captain Robert Jefferson Weiss.

Five months after the vessel was commissioned Captain Robert Weiss suffered severe injuries effectively ending his career. Starfleet was so impressed with Llewellyn’s efforts during the crisis situation they appointed him acting captain of the Enterprise and ordered him to continue the ship’s mission into the Epislon Quadrant and to investigate this new threat from the Icari Imperium.