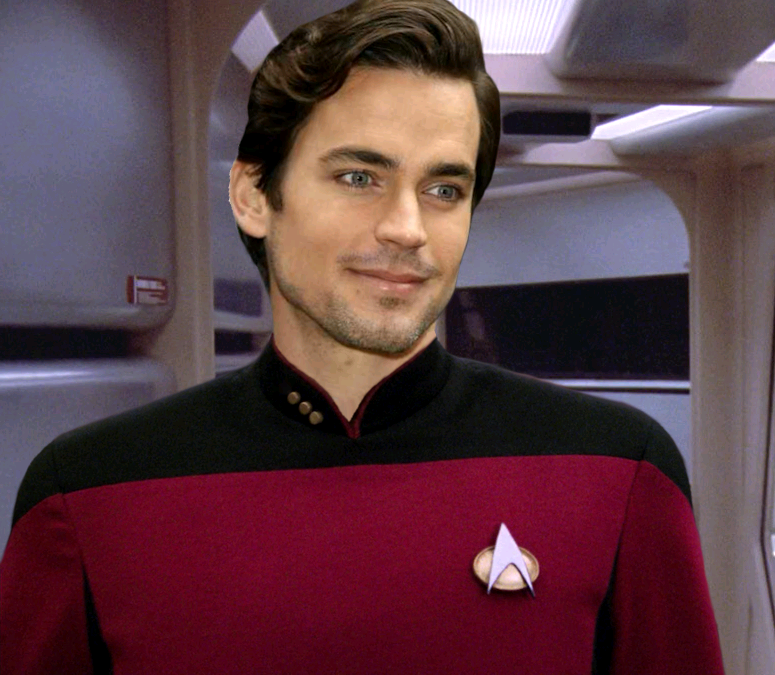 physical On the younger side, having just entered his 30's. Slightly tanned complexion owing to his growing up on Cestus III on the outskirts of pike city. Lean build, owing to his exercise regimen. Running and Cardio more so than bulking up Brown hair kept short with blue eyes. Short beard, kept trim Personality Multi faceted, owing to the situation For example, at his work he'll cut up to a degree but he's more or less all business. But also believes in his motto "if you can't have fun, why do it." Off duty he is a social creature. He's not averse to mingling in the ships lounge with senior staff Has been lnown to act a little unconventional at times. Mostly practical jokes at the academy

Born in 2337 on the Colony of Cestus III, Dillon was your more or less typical kid. Growing up on the outskirts of Pike city to a pair of ordinary joes. His days were simple. Grammar school where he learned the basics. Days with his buddies, where he learned how to make mischief. Run ins with the local security officers due to said mischief. And sports. (Add a little more of his academy days in this section.)

Living near Pike City, it was unavoidable. At age 5 or 6 he discovered baseball for himself. He entered the little league that had sprung up around the colony, the Pike City Homesteaders they were called. He played a pretty passable shortstop. Baseball also served as a means to get some much need focus. Learning teamwork, all those things.

Starfleet never really entered his mind, he was just content to be a ball player until he died.He couldn’t imagine doing anything else. He felt at home with the team, like he could let his hair down and be himself. That was until he discovered that Starfleet Academy had athletics. He was about 14 at the time. From the year 2535 to 2357 this was his goal. Hitting the books as well as the diamond, eager to join the Academy. But for self serving reasons, to play ball.

Upon his acceptance in 2358 to his graduation in 2361 play ball he did. But he also did his bit as a cadet, choosing a security and tactical track. Dillon wasn’t one to do things half way and he applied himself in his studies, learning what it really meant to be a Starfleet officer. Which caused him to second guess his “ball player” future.

That isn’t to say he was completely spit and polish. From time to time he would play pranks on his fellows. Harmless stuff like hiding stuff, but leaving clues on how to find it. Kid stuff mostly. For example, hiding a Vulcan friends IDIC medallion in a weird place. Taping “I love Andorians.” to a Tellarite friend while he was sleeping

Upon Graduation he was sent to the Excelsior class USS Comfort as a lowly brig officer. He did his job, guarding prisoners there. He also participated in away missions.

One notable mission was to a hospital on a quarantined planet where his team was tasked with guarding vital supplies. With limited rules of engagement. The native population would try to pass the gates. Dillon was keen on letting them in. Medical orders trumped him there however.

He wouldn’t fire on helpless civilians though, and told his CO thus. Which was bad for a fresh ensign to even think about.

He expected to be drummed out of the fleet. To his surprise, he wasn’t.

To this day he doesn’t know why he was spared. All he heard the CO say was this.

“You are lucky ensign. You have disobeyed a direct order, I’m sure you understand what that means. However, you’re heart is in the right place. I’d have probably done the same. Alas, the Admirals don’t see it that way. I’m not going to ruin your career over this. Needless to say the rest of your cruise on the Comfort will be spent aboard ship as a shipboard SO”

A letter of reprimand was put in his file, as was procedure. Dillon felt annoyed at the fact. He felt that MOs were supposed to look after patients. However he took it in stride. He tried to protest but was met by General order 28

He stayed aboard the Comfort and did his job until 2363

Eventually on the  Comfort he reached the rank of Lieutenant junior grade before being transferred in 2363 to the Ambassador Class USS Arlington. The Captain of the Arlington called Dillon into his ready room. In the course of that meeting, the CO informed him that he knew of his record on the Comfort. And he was impressed.

The CO. a pleasant Bolian officer was big on morals. And he felt that Dillon was the sort of officer that’d put the ship above himself. That was when Dillon was promoted to full Lieutenant and posted as CSTO. A post he held for 4 years, eventually becoming second officer. Beginning in 2363 and lasting until they was recalled in 2367 to help defend Earth from the Borg invasion.

However, as fate would have it, they missed the battle of Wolf 359, receiving the orders too late. In fact she arrived just as the Enterprise had enacted their plan.

However, Wolf 359 had taken its toll on Starfleet with them losing many experienced officers. Due to this personnel shortage the CO and XO were reassigned to different commands to help plug the gaps. This left the Command position open. Dillon now takes the reins of the ship, his inexperience showing through as he assembles a crew to fulfil Starfleet’s mission of exploration.