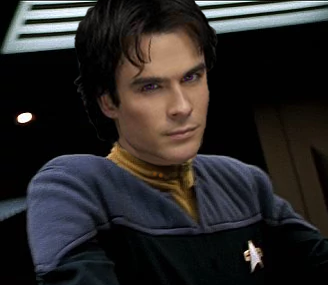 In 2353, Xenex gained its independence following a long conflict with the Danteri, who had occupied the planet for the previous three hundred years. In the standard year 2359, Nicholas Hunter (N’k’l’as of Hunter) was born on the planet Xenex in Sector 221-G of the Beta Quadrant. Being born, he would reflect later, was to be the easiest part of his life.

From a young age, Nicholas was stubborn, determined and obliged to do as he pleased. This was mostly attributed to the fact that his parents died in an air skiff accident when he was 10. With no relatives willing to take him in, N’k’l’as took to the streets and fell in with a band of young street thieves. The boy was caught a year later, in 2370, and incarcerated in his home city of Hunter.

It was then that N’k’l’as realized that if he continued down his current path, he would either wind up dead or in prison for life. Neither fate was acceptable. He served the two year sentence he was given and upon his release, sought a job with a local grocer. Although skeptical, the old man known as C’r’a’bas had no young ones of his own and took a liking to N’k’l’as. He hired the boy to clean up around the store and even gave him the one corner of the store room in which to sleep. This was the new beginning that N’k’l’as sought.

In the four years that followed, N’k’l’as began taking subspace courses to acquire an education, a means to an end. His true goal was to leave his arid hell of a home world. And in 2375, at sixteen years of age, he applied and was accepted into Starfleet Academy on Earth. Although C’r’a’bas had grown very fond of the boy he had taken in, he knew that this was his best chance at having a life and not merely an existence on Xenex. They would never see each other again.

Starfleet Academy, for lack of a better term, blew Nick’s mind. For starters, he earned a new name, Nick. He had always found Xenexian names to be a mouthful at the best of times, though he had no trouble with them, he was sure others did and he found his new moniker to be refreshing. Gone was the ever difficult to pronounce N’k’l’as of Hunter, replaced by Cadet Nicholas Hunter. It was a good fit.

During the next four years, Hunter excelled at the Academy. In fact, his marks were so high, that upon graduation he was recommended for the Starfleet Tactical War College on Beta Niobe III. There, Hunter found that he had a penchant for planning, always analyzing any given situation and following through to a logical conclusion. The War College taught him how to fight…any where…any time. He graduated at the top of his class in 2381.

As Hunter would discover, on his first assignment, fighting was not always the answer. Assigned to the USS Bonaventure in 2381 as an Operations Officer, Hunter discovered there was more to keeping the peace than simply engaging the enemy. It was Nick’s first duty and when three Romulan Warbirds decided to test a disputed border near Organia. The Bonaventure, under the command of Captain Vincent Kane, stood the Romulans to their ground. Although refusing to fire, he kept the Bonaventure between the invaders and the planet. The Romulans, stymied, withdrew.

When he asked Kane why he had not fired on the Romulans, his commander simply smiled. “It was a pissing contest, Mr. Hunter,” he had said. “They weren’t going to start a war over a single planet. They just wanted to see if we could be provoked.” Hunter nodded. They had not wanted Organia at all.

In 2383, Hunter was promoted Lieutenant jg and made Assistant Chief of Operations aboard the USS Leningrad, patrolling the Klingon Borders. It was an eye-opening experience. Nick had never considered himself ruthless…until he had met D’kath. Seven feet if he was an inch, the tallest Klingon Nick had ever seen, with the brawn to back it up. D’kath was the Leningrad’s Chief of Ops. Nick’s boss.

D’kath took it upon himself to teach Hunter all he could. The big Klingon schooled him in much more than fighting with a bat’leth. Philosophy, art and Klingon culture, as well. He could even speak Klingon on a passable level when he left the Leningrad for his next posting. D’kath looked like a proud father as he watched the shuttle depart from the bridge.

2386 found Hunter on a different kind of posting. A space station. Typhon Station, in the much disputed Typhon Expanse, had always been a hotly debated piece of real estate. Not so much for its location, but for the fact that strange things always seemed to happen there. Just thirteen years prior, The Borg had sought to invade Sector 001 through the channel of space there. Thankfully, Hunter’s tour there was mostly uneventful. Mostly.

In 2389, Nick received a promotion to Lieutenant SG and assignment to the USS Hawaii as her new Chief of Operations under Commander Akio Tachibana.