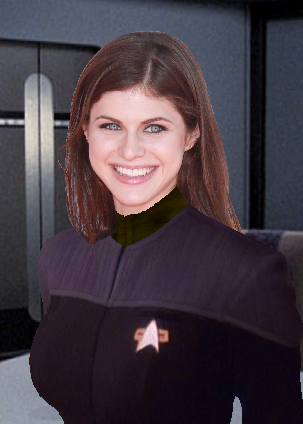 Stephanie is a gifted engineer with a checkered background and a healthy lack of respect for authority. She joined Starfleet as a means of trying to distance herself from the sins of her past. She graduated the Academy at the age of 18. Upon Graduation, she was assigned to Starfleet Security's Data Protection Project where she developed new methods of data encryption that she claims to be unbreakable. So far, no one has proven her wrong. Currently assigned to the USS Valhalla as Chief Engineer.

Stephanie O’Hara had always been something of a problem child. Her curiosity, coupled with her twisted sense of humor and her flippant attitude made her quite the handful.

Growing up on New Sidney, she found herself with no end of vices to occupy her time. Before long she had built her own mainframe out of scavenged and discarded parts and was hacking into government systems to play pranks on various agencies. She Before too long, she had gotten herself noticed by the Orion Syndicate. The Syndicate recognized her talent her talent as something they could exploit and had her fitted with a data port. She was 13 years old. For five years, she worked as a freelance hacker for the Syndicate. She was far enough removed from the consequences of her actions, that she never gave it a second thought. She was more interested in the challenge than the results… And the pay wasn’t anything to sneeze at either. She learned a great deal. Not just about Engineering and computer hacking but about the streets of New Sydney. She learned to gamble, fight, to fly shuttles, anything anyone would teach her.

Her epiphany came when she found out her father’s business was in huge amounts of debt to the Syndicate and she was told she had to choose between her family and the Syndicate. Ultimately, she made the right choice and booked her parents and brother on a ship off-world with forged IDs. She knew as soon as soon as the Syndicate caught wind of what she had done her life would be over, so she went to the only organization that could protect her. She enrolled at Starfleet Academy and majored in Computer Programming with a minor in Warp Theory.

Her instructors quickly noticed that she had a problem with authority. She would argue with them in class, turn in assignments when she felt like it, and generally make a big stink about how there was really nothing they could teach her. It was noted in her personnel file on more than one occasion that she was “not officer material” and she “didn’t embody the ideals of the Federation”. The only reason this behavior didn’t get her tossed out on her ear was the fact that she really did know her stuff. and when she did hand in her assignments, they surpassed every expectation of her instructors.

She would have been content to be a non-comm but was pushed into officer training by an instructor who convinced her that Engineering wasn’t her only talent. Some say she graduated by sheer force of will.

Her first assignment out of the Academy was, oddly enough with Starfleet Security. Her assignment was to devise new safeguards and countermeasures against unauthorized parties trying to gain access to secure data. During her 10 year tenure on Earth, she discovered that Orion Syndicate knew where she was. While she didn’t think that the syndicate would be foolhardy enough to attempt to gain access to one of the most heavily guarded facilities in the quadrant, she decided that for her own safety, and the safety of those around her she would be better served to put in  a request to transfer to a Starship.