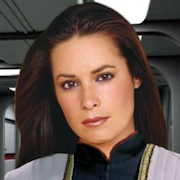 Before coming to Starbase Wake Island, Brennan had a close working relationship with several SFMC units, inserting them regularly into hot combat zones as a part of her missions as a Tactical oficer. As she rose into command, she brought those relationships and understandings with her. First as the Captain of a vessel with a Marine Detachment and now in command of the Starbase ad it'saccompanying gunships and MEU.

Born on Titan the moon of Mars in early 2353.  Her parents were teachers at the Starfleet Technical Academy on Mars itself.  As a child Emily was involved in robotics competitions and would compete in contests designing robots to compete in various tasks.  As she got older though, the attraction of robotics and engineering wore off.  As a preteen she enjoyed going to the mall and hanging out in the Holo-Suites Amusement park.  There was never a shrtage of friends nor acquaintances to hang around with.  In High School she joined a chess team and a mixed martial arts club.  It was among some of the guys here that she ran into trouble.  After her encounter right and wrong were massively important in her life.  It was at this time that she first took an interest in Law Enforcement.  This led her, when she went to apply for Starfleet Academy to try to pursue the Security field.

Emily’s interest in security brought her to terms with what would prove to be her real passion, tactics.   She studied war in many different aspects but most especially combined arms and it’s usage throughout the length of human history, from Kights and spearmen to Navy and Marines, she wanted to know as much as she could.  She remains a student of war to this day, and is tickled to work so closely with the Starfleet Marine Corps as a part of her work with the Task Force 9.