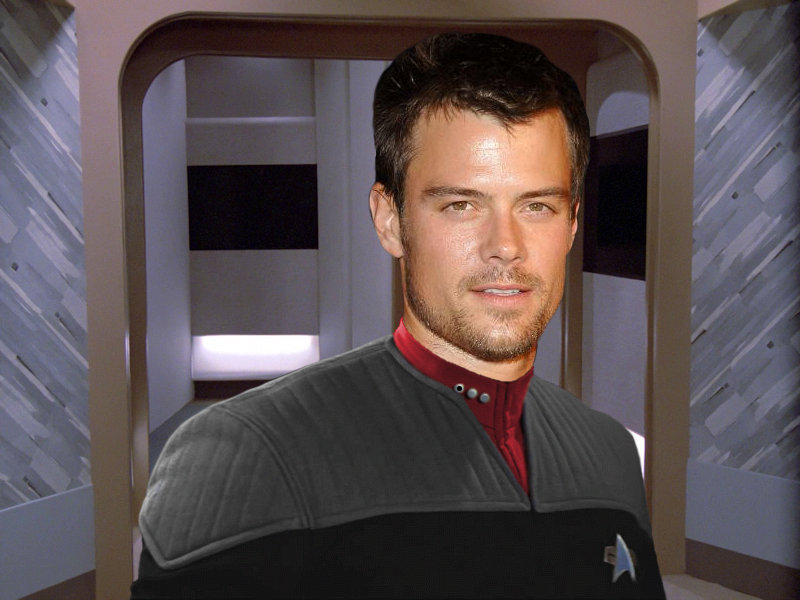 Lt Cmdr Benjamin Barnes has currently joined the crew of the USS Infinity as the ships Chief Tactical Officer. Barnes is an accomplished Dominion war veteran who had recently served four years at the Academy as an instructor in the fields of Security and Tactical. He was born and raised in Portsmouth a south English coastal city whose history is long and proud in serving not just Starfleet but Earths military historical figures. He is a strong-minded individual who lives life day by day to a strict self-inflicted set of morals.

Benjamin was born on stardate 27978.1 (2350, October 3rd) to Patricia and William Barnes at the St Mary’s Hospital in Portsmouth, Earth. Weighing in at 8lb and 6oz above the Human average. Hampshire would be where Ben would live most of his childhood attending Kingscourt Academy, a school located in the Village of Catherington specializing in Physical Education and Astrophysics. Though Ben studied both during his time at the school he had always been more talented towards Physical activities scoring highly and usually above most of his peers whereas only scoring the average for Science, Physics, Maths, Xeno Studies and other subjects within the federations core curriculum.

After reaching the age of 11 and the school’s maximum age Benjamin then began attending Ark Charter Academy in Southsea which shares a geographical border with Portsmouth. The Academy was a perfect facility for Ben to attend with a speciality in Physical Education and History, both of which Ben particularly enjoyed and excelled in.

Ben, like all Pre-teens do, went through spotty behavioral issues such as drinking, fighting, girls and once drugs. They all soon ironed out by the age of 16 where he obtained the appropriate skills and knowledge to apply and subsequently being accepted.

He began attending Starfleet Academy on stardate 27978.1 (January 23rd, 2066). During his first year, Ben performed at the expected level for most first-year cadets in the core curriculum only besting his peers in History (Birth of the Federation) and Tactics (Starship Defensive and Offensive systems) Ben also performed above the standard in Survival though not coming top of his class, much to his displeasure.

During his second year, Ben continued to study the core curriculum and like all cadets were allowed to take a 2 Majors. One being Security and Tactical Major involving several compulsory courses in the following fields; Combat: Introduction to Starship Combat, Security: Armoury Department, Engineering: Deflectors, Weapons and Security systems, Tactics: Phasers and Photon Torpedos and finally Survival: Land-based Survival in Desert, Ocean, Jungle, and Moderate conditions.

His second Major was in the field of Command involving the following courses; Duty Post Responsibilities, Starfleet General Orders, Starfleet Rank Index, United Federation of Planets Timeline and Calculating Stardates. In all subjects, Ben enjoyed performing above standard in Survival and tactics and only falling behind in Engineering. During this term, Ben has also enrolled in Shuttlecraft Piloting and subsystems a core course for second-year students.

Following on from this busy year Ben continued his Majors in Security, Tactical, and Command. As all third-year cadets and the beginning of the year, Ben took his Core curriculum exams and passing all exams. On Top of his two majors, Ben added extra credits towards his Tactical Major adding; Tactics: Combat, Martial Arts, Anbo-Jyutsu and Federation Standard, Survival: Captivity and Tactics: Small Units.

During his fourth and final year completed both his Majors coming in the top third of his class but not top overall, Ben also took and completed a Minor in Medical covering Medical: Xenobiology, Engineering: Medical Systems and Triage facilities, Medical: Counselling during the last semester Ben topped his class in his Security and Tactical. Ben averaged, but still falling in the top third in Medical/Counselling and Command.

Ben’s first and foremost assignment was to the USS Penzance, A Nova class ship conducting scientific research near Ferengi Alliance Space along with the USS Fracture. Ben spent three years here before the breakout of the dominion war in the year 2373. The initial breakout of the war was chaotic and Ben found himself being assigned and reassigned several times before finding himself aboard the USS Mary-Rose, a Galaxy class ship.

The first year of the war was disastrous for the federation, as the Dominion caught them completely off guard. The Mary-Rose was involved in several battles until a particularly hairy battle saw the ship almost destroyed, by a Jem’Hadr Squadron whilst escorting Marines to the frontlines. During the battle, the ship lost over half its crew and main systems. The marine transport ships were completely destroyed. Leaving a sour taste his bens mouth and an unrelenting thirst for retribution.

After finally limping back to a starbase the ship underwent a major refit readying it just in time for the federation retaking of deep space 9. The Mary-Rose alone destroyed several Jem’hadr Ships.

The years that followed Benjamin continued to serve aboard the USS Mary-Rose during battles such as Chin’toka system and the successful breach of the Kalandra System. Finally Ben and the USS Mary-Rose took part in the Cardassian invasion until finally the end of the war in 2375. Ben continued to serve on the USS Mary-Rose until she was reassigned back to its intended role of deep space exploration in 2378 after spending 6 years aboard the ship Ben gained unfathomable knowledge and experience, not just in the role of Tactical and Security but engineering and command as well.

Taking a years break on Starbase 1 after almost 3 years of fighting and the further 3 of subsequent Marquee and Cardassian battles Ben finally found the peace he wanted so much, to be oddly disturbing. And so in the year 2380, Benjamin took the next deep space assignment aboard the USS Razor, a sovereign class starship. Benjamin spent the next 5 years aboard the Razor on deep space assignments carrying out Starfleet’s primary role as explorers. In the five years in deep space, Benjamin saw things he’d thought he’d never set eyes upon including the Borg. During the encounter, the Razor and five other ships were attacked resulting in two destroyed and the Razor crippled in space. Fortunately, a joint Federation, Klingon, and Romulan quick reaction fleet reinforced the crippled ships. Upon destroying the Borg ship and recovering the remaining ships back to Sol.

Benjamin then spent the next 3 years teaching at the Academy in the fields of Security, Tactical, and Engineering. Though he never completely felt happy here Ben did enjoy his time however when he was approached and offered the assignment to the Delta Quadrant aboard the USS Infinity he couldn’t say no.