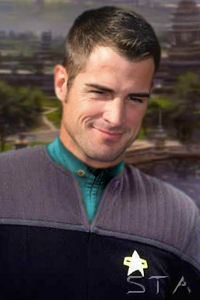 Yakov, or Yasha to anyone who is actually on a first name basis with him, has been a nurse for 20 years, although only the last 8 of them have been with the fleet. Before joining the fleet, he received a Doctorate of Practical Nursing from the Oregon Health Sciences University of Earth, while also serving as a residential ward nurse at St. Jude Children's Hospital. He later spent three years in "private practice" in a remote Siberian village. Since joining the fleet, he has served as the head of general nursing on Starbase 156, and the Head Nurse for the USS Valiant and USS Scorpio. He has been called upon by Captain Alice Griffin to assume the role of Chief Medical Officer to bring stability and normalcy to the department.

Dikson was never a bustling or active city, and by the time of Yakov’s birth that was more true of the remote Siberian village of 310 people than ever before. By the 2340’s it had become a haven for those in search of a simpler life without the pervasive influence of technology and technocratic socialism.

As a result Yakov’s early life and childhood are filled with the experiences of doing without things many take for granted. Learning to fish and hunt for his food are important memories, as are the difficulty of distance education in tight knit community that opposed using transporters to send the few children to a school. For his part, Yakov did as well as he could and was fascinated by the life sciences and took to spending large amounts of time with the sole octogenarian physician that still lived in the village, Alexandrei Dmitrovitch. Very influenced by the kind and forward thinking Dr. “Alyosha”, “Yoshka” expressed an interest in becoming a nurse to care for people.

Without even a proper school in the village, there was no question that he would have to go elsewhere to get the education needed. Unfortunately, that also started a rift between himself and his family. His traditionalist minded parents, along with his older brother and sister were insensed that he didn’t want to follow a path within the village and feared he’d never return once he left. However, Yakov was convinced of what he wanted, so in due time he left Dikson to attend the Oregon Health Sciences University in the city of Portland, majoring in nursing.

His undergraduate studies weren’t particularly eventful, but afterwards he did prove his parents partially correct as he did not return to Dikson immediately. Instead he took a position at the St. Jude’s Children’s Hospital as a nurse. While there, he showed the benefit of his naturally honest and kind disposition, connecting well with the young patients. He also caught the eye of a fresh, young doctor Gregorio, for whom he felt a mutual appreciation. They became friends, then roommates, and then something more over the next three years without realizing it until, amusingly enough, a little girl asked why they weren’t married. It seemed a natural enough step at that point, the two were married the next fall.

Soon thereafter, Yakov felt the pull to do more, along with the yearning for home and returned, as a daily commuter, to complete his Doctorate of Practical Nursing over the course of the next four years, focusing on practical nursing and underserved communities. Afterwards, however, spelt the beginning of the end of his marriage, and, by extension, his civilian career. Even after all the years he’d been gone, the fight and accusation of his parents still stung, and, at heart, he was still in love with Siberia. He wanted to go home.

In the beginning, it wasn’t terribly bad. He and Gregorio were able to find a place to live in Dikson easily enough, and Yakov’s nursing skills, and the nightly presence of a full-fledged doctor, were, if not appreciated, at least recognized as useful, Dr. Alyosha having long since shuffled loose the mortal coil However, as is often the case, little insults and petty slights built over time. Yakov himself had been gone a long time, and he had changed. The rift with his parents didn’t heal. Worse, however, was the attitude towards Gregorio. The doctor refused to give up replicators and other modern comforts refused by the town, to great general resentment. He was an outsider, and eventually a very unwelcome one.

The strain showed on the two men’s relationship. Ultimately, they fought, and eventually Gregorio decided that, for better or worse, it was time for the two to go their own ways if they couldn’t find a path that would lead them back together. They divorced, not particularly messily, but that didn’t make it any less painful. Nor did it help. Yakov himself was still not really part of the village anymore and how now added a failed marriage to the list of ways in which he hadn’t lived up to expectations. He came to realize that as much as the place would be part of him, he was no longer part of it.

Afterwards, he found he couldn’t really stand to stay in Siberia anymore, but saw a galaxy still in need of some pretty heavy healing in more than a few very neglected places. In short order he found himself in a recruiting office talking about the direct commission program into Starfleet. He did well in basic training, and quickly completed the additional courses in shipboard operations and xeno-nursing. Upon receiving his commission he was first assigned to the Olympic class vessel USS Li Tieguai’s nursing department as a general ward nurse for his first 2 years of duty. After proving himself in shipboard operations, he was transferred to Starbase 156, a Spaceodck class facility, as the head of its general nursing division, although the huge resources and scope were outside of his prior practice. After just three years there, he found he really much preferred the life aboard ship and asked to be assigned to a ship berth again, now finding himself as the head nurse aboard the USS Valiant for its final mission before transferring once again to the USS Scorpio.