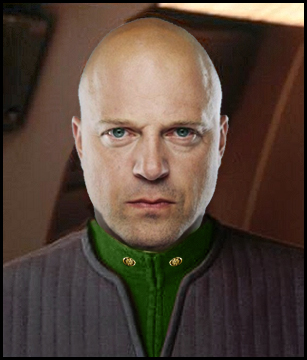 Born to Anton and Maria, he spent his toddler years in the small Black Forest town of Villingen, before his parents were posted as colonists to the third planet of the Bersallis system. His childhood in the colony was rough, and he was often found roughhousing with the other children. The planet itself is subject to violent fire storms, and one particularly bad and fast moving one in 2369 overwhelmed the colonies defectors. Luckily, the USS Enterprise-D was dispatched to evacuate the colony, and did so, but with a loss of eight crewmen.

At age 15, he experienced Starfleet for the first time, and was immediately enamored. Just a year later, he applied for early entrance to Starfleet, and was accepted. While physically, he was one of the top cadets, his haphazard education at the colony hampered his advancement within the Academy. After the two-year Early Entrance phase, he was put on academic caution and the Marines track was suggested to him. He accepted the transfer to Starfleet Marines, and took to it like a duck to water.

He excelled during his yearlong boot camp and training phase, impressing the drill sergeants and earning a graduation promotion to Private First Class. He was given his choice of MOS (Military Occupation Specialty) and selected Scout. He transferred to the Scout School in Chile, and learned the reconnaissance, sniping, and stealth techniques which had been passed down through the generations.

At the successful completion of the Scout School, he was transferred to the Marine 3rd Regiment, stationed on Luna. Now a non-commissioned officer, he worked to keep his men trained, focused, and driven. He was assigned Platoon Sergeant soon after arrival, and accompanied his platoon into several major engagements. Though he won no laurels, he acquitted himself well, and his tactical intelligence shone through.

The Marine General on Luna nominated him for Officer Command School and a commission as an officer. He gratefully accepted, never having thought he’d amount to anything more than a grunt. He spent four years at the OCS, learning all the information he hadn’t been able to at Starfleet Academy. And with the years of Marine experience behind him, he had the maturity to buckle down and focus on his work.

After OCS, he was commissioned as an officer in the Marines, and posted to the Scout School in Chile as a Platoon Training Officer. There he trained many of the same grunts he had once been, and passed on the lessons which had served him so well. He spent four years at the School, before being promoted and assigned to Fox 1/1 as a Platoon Commander. He led his men into battle twice, was wounded once, and only lost one man during his tenure. With the death of the Fox Company Commander, he was selected to take the position.