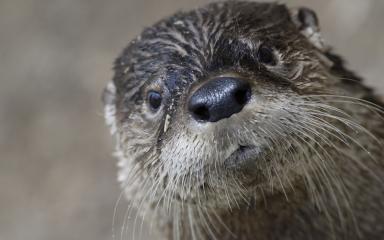 Zim Salmon has served in various positions within Starfleet, working in labs or on planet side projects. His inquisitive nature is not to be denied however, and he is seeking to land a position aboard a ship as a chief Science Officer. His actual shipboard experience is quite limited, but his academic credentials are outstanding. He has risen through the ranks on his merits, but his lack of shipboard experience has knocked him out of competition for the position he seeks so far.

Zim Salmon is a Quim, often described by earth men as “bipedal otters”. The outward appearance is very similar, and has led to various theories regarding their lineage and possible seeding by ancient races. Quim stand around 1.5 meters high on average, and there is only a slight difference between males and females in height.

His race are inquisitive, and have spread to many planets with significant bodies of water. Zim was born on Risa, where there is a significant number of Quim. His own father serves in the Risa coastguard, where Quim (particularly rescue swimmers) are fairly common. The elder Quim has risen to a respectable rank, and has similar expectations for his young in their careers.

Zim’s real name, in the Quim native language, is a series of chirps and whistles. Hence the adopted alias of “Zim Salmon” for humanoid use, a common practice among his species.

While his specialty is extra-planetary marine biology, Lt Salmon is well versed in the general sciences. He graduated third in his class from the Academy, and holds a Doctorate in marine biology. At the Academy or Universities, he is usually called Dr. Salmon but on board ship he is typically addressed as Lieutenant.