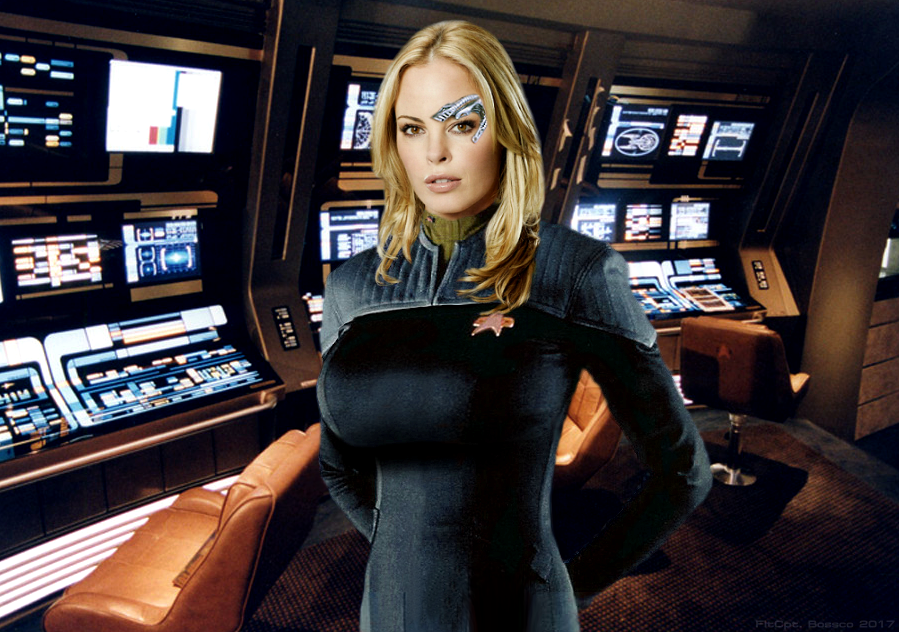 Samantha is a rescued former Borg. She struggles with the emotional scars of the experience but is a dedicated tactical officer for her ship. She served on the Intrepid-class USS Alicorn (later renamed USS Thesis, http://www.uss-alicorn.com/SMS) NCC-76303, part of Bravo Fleet Task Force 21. She is currently a Lieutenant awaiting assignment.

Physical Description
Samantha is physically fit, as a woman who engages in moderate levels of exercise. She has some Borg remnants on her body, mostly hidden behind her uniform, but her right hand and left eye still show the scars of her having been assimilated.

Personality
Samantha, who goes by “Sammy” with her friends, was a happy girl growing up and loved the idea of going to the stars, and enjoyed the tactical arts, being a bit rough and tumble growing up in Germany and the US southern states and mountains. She was friendly and compassionate. After graduating Starfleet Academy, her ship was involved in a Borg attack, in which she was assimilated and escaped on the Borg sphere. She still bears the emotional scars of this, in that she sometimes finds it hard to emote normally, or even smile, though she is slowly coming around. She is trying to loosen up, but her sense of order and logic has been an asset in missions before.

Strengths and Weaknesses
Samantha’s strengths include her drive to succeed, her Borg-derived desire for order and perfection, and her natural desire for justice and right and wrong. She is a thorough officer, and can find unique ways to solve problems. Her weaknesses include her emotional scars from having been assimilated, and a desire for revenge on the Borg for violating her mind, and a bit of difficulty relating to people after her incident.

Ambitions
Samantha strives to be a great officer, and hopes one day to be free of all her Borg implants. She has toyed with the idea of command, but right now she wants to work in a tactical or strategic operations role, as that satisfies her need for order and justice.

History
Samantha grew up in Königsberg, and later moved to Breslau, then Cologne, as a child, then spent her teenage years in Georgia in the United States, and loved being able to hike the Appalachians from her home in Helen, Georgia. She loved seeing stories about Starfleet, and wanted to join when she was 12. By the time she was 18, she signed up and with her history in Tae Kwon Do, and a strong sense of justice given to her by her father, she chose tactical as her focus. She had great aim and a penchant for grappling and disarming opponents. She served on board the USS Sherman, which was attacked by the Borg, and she was one of several dozen officers who were assimilated. After spending about 2 years as a drone, she had the luck to have been rescued by Captain Scilding of the USS Utopia, a family friend of hers who sponsored her entry into the Academy. After several months of therapy, and reconstructive surgery to remove as much of her Borg implants as possible, she was found fit to return to duty, and was assigned to the USS Alicorn under Vice Admiral Liorae Saeihr, making friends with the navigator, Chloe Parfaith, the engineer, first officer Dylan Thalyessin (OOC: Mark Harmon), and the admiral herself. She served for about two years on the vessel, being promoted to full Lieutenant and to Chief Tactical/Security Officer, showing an aptitude for covert operations, interrogation, and ship-to-ship combat, and some skill in repairing tactical systems and balancing tactical resources. The ship was decommissioned, and she is now awaiting her next ship assignment in Starfleet.

OOC: Our sim just stopped posting and it’s now only available (partially) on the Wayback Machine.