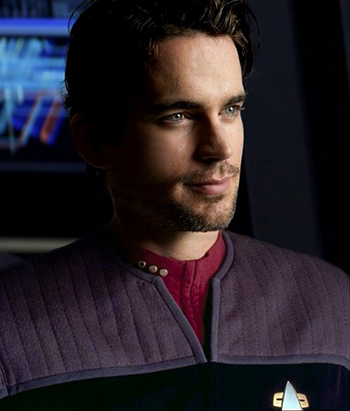 Ambitious, at odds with his captain, and driven to be the best, Blackford's assignment to the Ark Royal comes not from his own success but by the manipulations of others.

Raised in a strict household where discipline and accomplishment were the most important things, Damien might’ve wished for a less stressful childhood if it hadn’t prepared him so well for his future. Both of his parents were ambitious, highly dedicated to their careers, though this did not make them bad at raising a son. Rather, they passed along their own work ethic, their drive, and their need for challenges to meet their exhaustive goals. Damien had to dedicate himself to school, sports, and other activities to satisfy their own expectations until it became normal to try to excel at everything he does.

There was little discussion about Damien joining Starfleet. It was assumed he would apply as soon as he was able. Damien earned his acceptance into the Academy, despite some thinking his parents’ high position might have something to do with it. He proved himself a capable young officer in training while there, specialized in piloting and tactics, served as a squadron captain, was the velocity champion his final two years, and earned a reputation as both a fair leader and an overachiever.

Damien moved on to ship duty after graduation, serving as a junior helmsman of the USS Gryphon. By staying focused on improving his talents, volunteering for extra duty and away team openings, passing all the right tests, and learning everything he could from his superiors, Damien never rested on his laurels and began a steady climb up the ranks. He honed his piloting skills on the Gryphon, later served with bravery and distinction on board the Merrimack, ran the daredevil flight control department on the Sarajevo, on each ship working hard to earn respect and be recognized.

In 2387, the court martial of the commanding officer of the USS Fearless began, and Damien’s parents were part of the prosecuting team. The admiral and JAG officer both seemed to work hard in an attempt to make sure Scott Parker would be stripped of rank and never serve in Starfleet again. In the end, their attempts to see Parker imprisoned and thrown out of the fleet failed, but they were able to use their influence to continue to watch him and be ready when and if he failed again.

Damien found himself transferred off the Sarajevo suddenly, given orders to report to the Ark Royal where he would serve as Commander Parker’s executive officer. He knew full well why his parents had done this, placing him there to serve as their eyes and ears, intending him to find some reason to relieve Parker of duty. While Damien is loyal to both them as both his parents and his superior officers, he is furious as well.

In his mind, he’d earned the chance to become an XO all on his own and had wanted to do it his way. To be used like this by his own family feels like a betrayal, though he’ll do his duty. Regardless of how he came to this position, Damien strives to be the best officer he can be, and watches Parker closely at the same time.