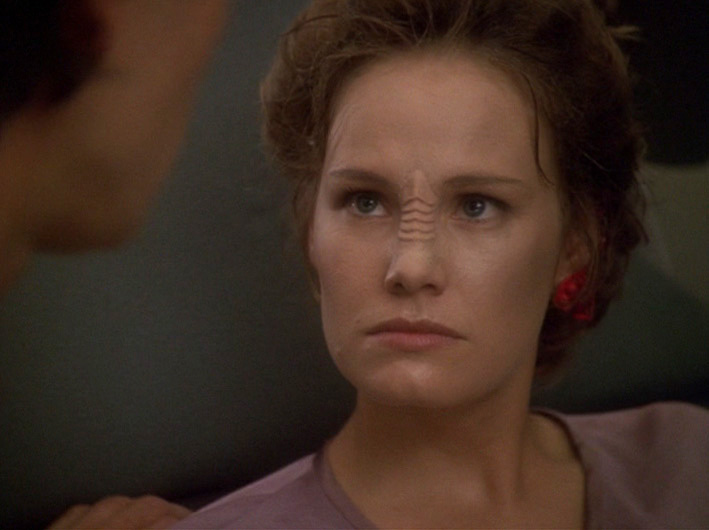 Lt Acker served as a senior medical officer aboard Deep Space 9. Her initial medical training was on her home planet of Valo II during the occupation by the Cardassians. She attended Starfleet Academy and graduated with honors. Her first position was as a junior medical officer aboard the USS Defiance. She was transferred to Deep Space 9 prior to the attack by the Klingons. She was promoted to senior medical officer after Starfleet retook Deep Space 9. She was named as Chief Medical Officer at SFM Revenant. After the destruction of the capital city, she was transferred to the USS Ascension as Chief Medical Officer. Now the Captain of the Ascension, she is making her way in uncharted waters.

Kather Dor Acker was born under brutal conditions in the Bajoran colony of Valo II. This colony was a penal colony commanded by the occupying forces of the Cardassians. She spent her entire childhood as a prisoner. She found no joy in anything. While she loved her grandmother, parents and brother, she found no happiness in the company of others. She earned a reputation of being aloof. After the liberation, she quickly married a man chosen by her father. Almost immediately after the marriage, she left for Starfleet Academy to pursue her dream of one day leading the medical services for all of Starfleet. Her husband stayed behind on Valo II to help rebuild. She has never had children, instead spending nearly all her time on her career. She has risen quickly through the officer ranks due to her diligence, expertise and willingness to place her own life in danger in the service of others. She was one of the few Starfleet personnel to stay behind on Deep Space 9 with the Bajoran Militia during the evacuation.