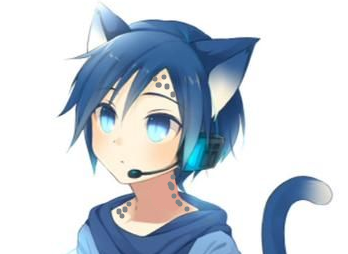 M’iri process a fragile physical appearance and a very small build. He has natural blue hair and eyes. His hair is styles to his left. His feline like ears and tail have blue tipped whited. He has Trill like spots that runs down his fair skin.

M’iri is enigmatic, aloof, stoic and a little naughty, much like an alley cat. He can also be sweet and kind, He likes teasing people. M’iri is selfless and protective, thus, he is willing to distance himself from those he cares in order to protect them and stop them from getting embroiled in his own troubles. Although M’iri may seem to have a passive personality, he is quite perceptive and honest.

Publicly (known to other characters)

The weeks that followed his birth the USS Nalowale, came under attacked by a Borg sphere. The crew fought valiantly against them. During the last moments of USS Nalowale, the commanding officer order all the surviving crew and civilians to evacuate the ship. His parents lost their lives that day.

M’iri’s grandmother escaped with him in her arms with only to watch as both ship was destroyed. The escaped pods made it to a federation outpost. M’iri’s grandmother was a former member of Starfleet when she was younger, she was a proud and kind woman who inspired her grandson to followed in his family footsteps.

They travel throughout the galaxy visiting worlds she once visited, they journey to archeology sites on different worlds to learn about the universe history. When he was 9 years old she passes away while they were visiting DS9 to view the wormhole.

He was taken to his mother’s family on a frontier federation colony They were a kind and always supported anything M’iri did or took interested in. When he enrolled into star fleet his grandparent was proud to watch him enter.

His Grandmother was once a member of section 31 who retired to spend time with her son. She returned to section 31 and personal trained M’iri though she died before finishing his training.

He has Telepathic and Psychokinetic abilities due to his heritage and trained to use both by a Vulcan tutor.

M’iri has semi-idea of his father’s side of family connection to Section 31, but all he truly known for sure they been part of it since the 22nd century.

His Father was a member of section 31 and Starfleet Intelligence

He also been taught Martial arts