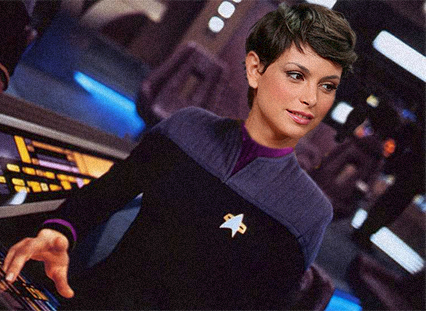 Aeryn's father had been in the Diplomatic Corps so it is a familiar environment for her. When the opportunity came she agreed to go to the Delta Quadrant for a specific mission for 3 months, after which she was supposed to return to the Alpha Quadrant. But now, she is stuck there and her requests to return home had been denied. She has a son there and the thought of never seeing him again is hard to deal with.

She spent her early years on earth until her mother, Jessica passed away when she was 7. Her father, Edriar Kelan, was a Betazoid diplomat with Starfleet at the time. After Jessica’s death he accepted a diplomatic appointment on Vulcan. Ayren attended a Vulcan school and was trained in logic and to utilize her telepathic potential, which was emerging at the time.

She had also spent time on Qon’oS when her father was posted there for 4 years. When she was 15 they returned to earth.
Her father traveled extensively and Ayren never missed an opportunity to join him on missions. She wanted to serve in that capacity since she could remember. At at the time, her troubled niece came to live with them, which prompted Aeryn became a counselor in Starfleet. She was posted on Starbase 243 as a counselor and fell in love with Mark Flemming a pilot. In the day she was going to tell him she was pregnant, he died in a shuttle craft accident. Once her son was born, she needed a change of scenery and went to the USS Maverich as Chief Counselor. She was exposed to a variety of first contact missions and when the diplomatic offier had to leave for personal reasons, the Captain called her in to help., It stirred again in her to study in that direction and she immersed herself in Federation Trade law, politics, Interplanatary relations etc. While serving on the Maverick, she saw the advertisement for the position for the Chief Diplomatic Officer on DS5 and applied, taking a chance. She had knowledge of this environment and knew that she lacked the experience usually required to fill this kind of position, especially on a big space station like DS5. She was very surprised when she was contacted by Starfleet HQ to go for what she thought was an interview. When she had arrived there, it was made clear that she had the position, except there was a condition attached. She had to ‘resign’ from Starfleet officially as being a civilian would make her more approachable to the key role players in the sector. It was a tough decision, but she did and the experience she gained far outweigh the sacrifice she made. She then served in the same capacity on the USS Freedom and then in the USS Achilles also as DDO. When the possibility came for her to join Starfleet to in exploring the Delta quadrant she applied. It was for an initial period of 3 months, but now she was stuck there, and all her attempts to return to her son, had failed.