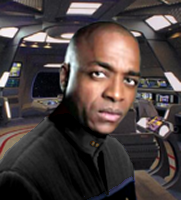 Hank joined Starfleet soon after high school, enrolling into Starfleet Academy in San Francisco, Earth. As a student he was not a stand out, except he did display very exceptional piloting skills and in his final year as a cadet, pursued specializing in fighter type spacecraft. Upon graduation from the academy, he was ordered to a Valkyrie squadron at the Utopia Planitia Fleet Yards, orbiting Mars, Sol. After three years at Mars, he was detached from his squadron to help system test the up and coming Gryphon fighter. Upon completion of these duties, he was transferred back to the Starfleet Academy in San Francisco, Earth, as an instructor in the Advanced Fighter School. He has since been transferred to the USS Ascension, to take command of the Starfighter Wing.

Henry David Elrod grew up in a chaotic home. His father, Carl Elrod (founder or Elrod Technologies), was caught cheating on his wife Tamera Elrod, with a younger woman (Crystine Surrat) who bore him a son, Phineas, who was already 15 by the time of the infamous discovery. Carl divorced his mother and married Crystine. And adopted Phineas.

When Hank was 15, his father and older brother (Jeff) were killed while en-route to Luna. Though it was listed as shuttle accident, Henry has always been suspicious.

He was immediately sent to live with his mother and paternal grand father David Gentry, in Marcus Iowa, North American Continent, Earth. All of the family holdings were liquidated, and Crystine and her son moved to Paris. Since his father’s will had been changed (just before his death), Hank received nothing.

During his last couple years with his mothers family, Hank was regaled with stories of Starfleet by his grandfather, David, who was a long retired starship captain. Also, the whole family in Marcus talked proudly of his uncle Frank, the Starfleet Marine.