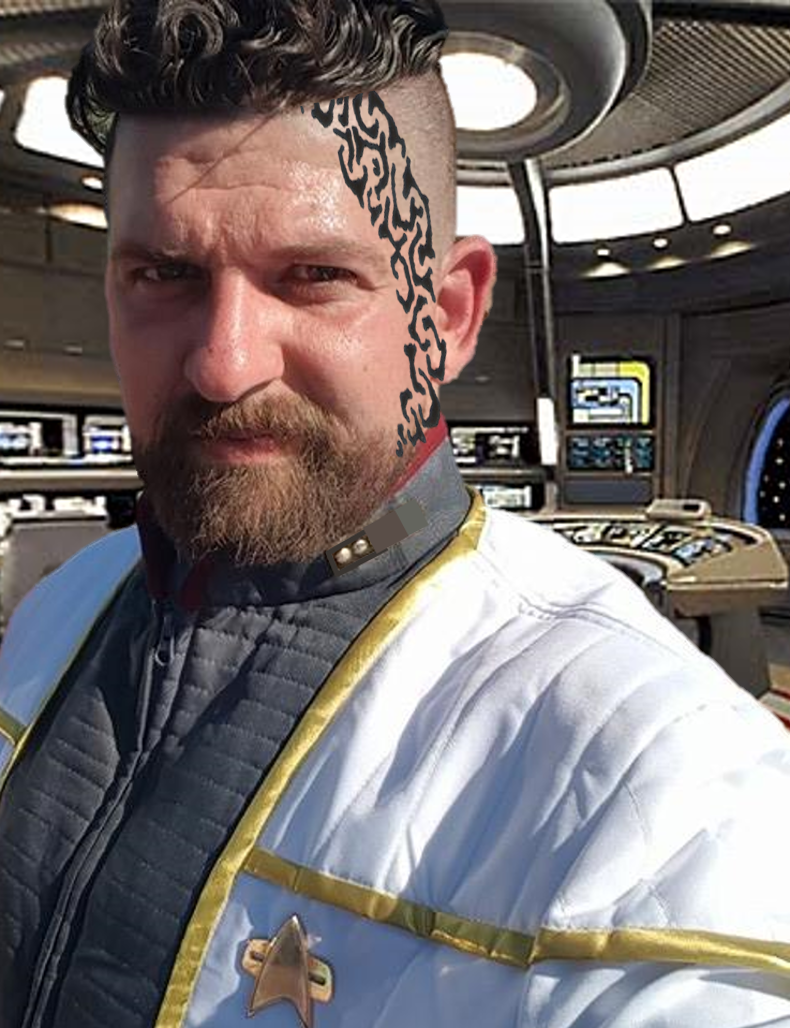 Candor Evatha enjoyed a privileged upbringing on Trill, thanks to his parents' wealth and influence. The Borg incursion of 2368 left psychological scars and were reignited during the incursion of 2373. in 2374, Candor applied to Starfleet and the Trill Symbiosis Commission simultaneously, and was surprised to be admitted to both. However, his nagging fear of the Borg - what he felt represented the very opposite of a joining - convinced him to dig in and work as hard as he ever had to become joined as well as become an officer. He graduated from Starfleet in 2379 and was joined to Manex in 2380. Manex provided a more structured analytical outlook that brought Candor to the field of Operations. Candor continues to find the balance between his love for new tech and fear of assimilation.

Manex was born a symbiote on Trill in 2017. It has had 5 hosts in its life, Candor being the most recent. Its first host came in 2077, a woman named Aleran who was a dancer. She lived long into retirement and died of old age. In 2135, its second host, Zemal came along. Zemal was an engineer. Zemal was murdered on Romulus in 2156 when a bomb destroyed the shuttle in which he was sleeping. Manex barely survived, and spent the next seventy years recovering in the symbiote caverns on Trill. In 2286, Manex was present on Earth when the alien Probe devastated the planet. The host at the time was Talabra, a teacher at Starfleet Academy who had just retired after 80 years of service, and with whom he had been joined for 60 years. Talabra lived to be over 100. In 2315, Manex joined Hovar, the Trill Ambassador to Vulcan. Hovar was a cunning diplomat and adapted to life on Vulcan so well the he retired there and even married a Vulcan. In 2378, He died in his sleep surrounded by his twelve adopted children. Manex’s experience with Hovar left the symbiote with an appreciation for Vulcan society, particularly its efficiency. This can be noticed with Candor, as Manex often brings out his more analytical side, preferring to subdue his more irrational emotions.

Candor excelled at the Academy and the Trill Commission as he dove into the studies. He is an expert on Trill and Vulcan culture, and can bring the knowledge of his previous hosts to bear in nearly any situation. He has an appreciation for the art of dance, a tendency to be a workaholic like an engineer, a cheeky (and sometimes insufferable) know-it-all attitude that comes from decades of teaching and the experiences of history. He also knows how to handle situations with a cool exterior, as Manex assuages his sometimes short temper. Candor loves his family, and they are all joined. He doesn’t quite understand what it means to lack privilege and abundance, and this sometimes makes him seem out of touch with his comrades – especially the humans who don’t seem to value that kind of lifestyle anyway. Manex often reminds him of the minimalism Hovar adopted on Vulcan, and how enriched his life was despite it. Still, Candor is young and has a brash streak that leads him to jump in ahead of others when he should often look before he leaps.

Candor has just accepted an offer to join Bravo Fleet’s Operations division. He awaits his assignment.