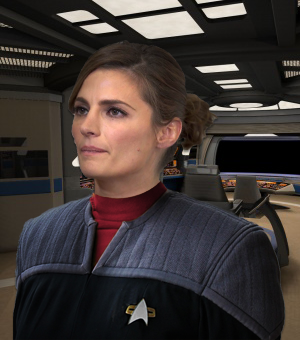 Wolf was primary raised by a starfleet officer and friend of her father which was mainly working all the time and her mother was not in the picture for some reason unknown to her.

Wolf became quite hard to handle causing all sorts of problems in school and life. Wolf was recommended to receive counseling sessions to try to correct her questionably behavior. Her father left it up to her to decide if she wanted counseling, at which time she denied to receive such.

When Wolf became 18 she was told about her mother and why she was not in the picture. Wolfs mother was all ways focused on her work as a law enforcement officer that she moved to the other side of the country to take up a position as a chief of police in a small town.

When Wolf became 21 she decided to enter in to the police academy. She was not sure why she done this but people that knows her would say it was to figure out why her mother decided to leave her for a job.

Wolf goes to school at night to learn about Shuttle Engineering along with taking some classes about Starship Design and Engineering to fill in some empty credit spots.

Wolf ends up turning to drinking to ease her pains about her mother leaving her for a job, yes she dose not know her at all but who would leave there child for a job.

Wolf ends up going to work drunk half of the time ending up in half of the SFPD’s Fleet of shuttles being destroyed. She is forced in to seeing the Departments Councilor and being suspended indefinitely until cleared by the Departments Councilor from flight operations and assigned to the Air Operations Air Crew as part of the Shuttle Maintenance Crew.

Wolf tries to go back to piloting but is denied clearance by the departments councilor thinking that she was not improving at all. Shortly after she resigns from the SFPD.

Wolf did odd jobs from being a schools janitor to working for a Space Port as a Shuttle Mechanic.

When Wolf turns 25 her guardian goes to her and talks to her about a stable life. In which point he recommends her to join starfleet.

Wolf takes the recommendation of her guardian and decides to enlist in to Starfleet Academy to become a Starship pilot or at least a fighter pilot.

Due to Wolfs record check resulting in the disclosure of the time she destroyed half of the SFPDs shuttles which in fact she did them a favor due to they where old and the department was talking about getting rid of them. She was told she could not enlist in to the Flight Control Department of Starfleet.

Starfleet offered her to enlist in to the Engineering Department with a rank promotion to Lieutenant upon completion of the academy which she denies and works on over turning the decision.

The review board has Wolf meet a councillor which clears her for Flight status as long as she meets with a councillor that is on duty at her given duty station once a week.

Lt Commander Standfast despite being Wolfs guardian stayed away from instructing her. The Lt Commander however was the grading instructor for her flight examination which he failed her on. Causing her to retake parts of her courses to retake the exam again in which she passed.

Lt Daniel’s is the best friend of Wolfs, despite she being a student to become a councillor she knew not to push in to Wolfs life to hard. She is listed on Wolf’s record as the main contact dealing with any counseling question about her.