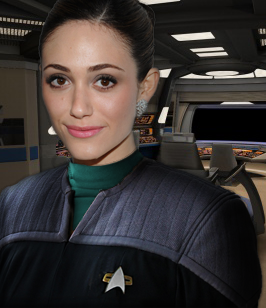 Adeline Bell was constantly mistaken for a teenager, standing at an impressive 5’. The skinny brunette was raised in Vegas by her Aunt Lucy and Uncle Bart after her mother died during childbirth. Her father was a “traveling scientist” Or so she was told. When she was 10 she found a letter to her mother explaining he had ran off with her mother’s best friend. Adeline had never told Aunt Lu about it, knowing it would devastate her that she had found it. Thus, began her painful life of trust issues, anti-social tenancies, and extreme fear of emotions. It was surprising that she’d been able to hold onto her lifelong friend Korabella, who she’d known since she was 3. But even their relationship was up and down. Korabella being the “beautiful socialite” attracted more attention than Adeline cared to deal with. She decided to move to Sacramento and attend Starfleet Medical Academy in attempts to get away from the weird looks and rumors that were often started about her. A wall flower to the core, Adeline dedicated her time to her studies, when not talking to Kora. She graduated near top of her class, only because Kora sure liked to talk. Instead of returning home after graduation, Adeline instead decided to take a personal vacation and travel. After all, who would miss “Awkward Addey.” It was during that time she got her first assignment.