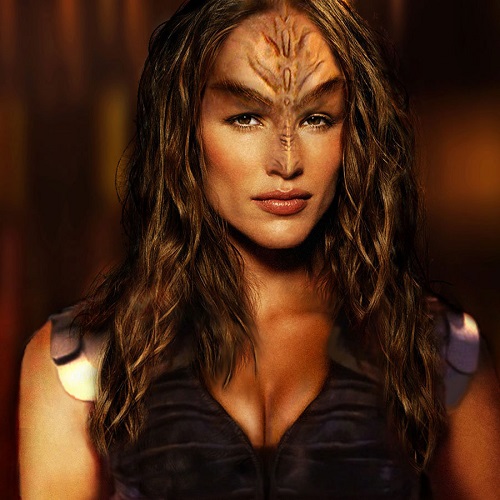 New to the position of Chief Security/Tactical Officer of the USS Cavalry, A'Nya hopes to serve with honor and distinction as she has on her former posting in Starfleet. She is the youngest of twins born to a Klingon mother, Tavanna, and Betazoid father, Tobrias Zinovia. When her mother died in 2367 at the Battle of Wolf 359 it affected her so much that by the time she was 16, A'Nya had decided she would enroll in Starfleet, if only to prevent others from experiencing such a loss as she had as a child. She graduated in the top 15% of her class at the Academy and has served Starfleet faithfully since then.

Born in 2366, A’Nya is the youngest of twins born to Tavanna and Tobrias Zinovia. When she and her brother were a year old, they lost their mother during the Battle of Wolf 395. Her mother had been on a civilian transport vessel that was en route to Earth; the twins and their father were on Earth visiting family friends at the time. The death of Tavanna, as well as the total lose of life from Wolf 359, affected the family for many years.

Growing up, A’Nya tended to be a difficult child. She constantly got into fights with her brother and arguments with her father. She was hurting and instead of addressing it, she buried it and took out her pain and anger on her family. For a long time she blamed her father for her mother’s death; if he’d just fought harder for Tavanna to wait a few days before joining them, maybe she wouldn’t have died when the Borg attacked Wolf 359.

When puberty hit, A’Nya’s empathic abilities awakened. While the first year was rather tumultuous, eventually her temperament evened out some. Enough so that she was able to let go of her anger and sadness in order to forgive her father and work to better her relationship with him. She also took time to mend her relationship with her twin brother; it became less confrontational and antagonistic. A’Nya’s ability to pick up on their emotions and sense their pain, anger, and sadness at the loss of Tavanna showed her that she wasn’t the only one suffering.

By the time A’Nya was 16-years-old, she knew just what she wanted to do with her life. Due to the loss of her mother and all the other lives at the Battle of Wolf 359, A’Nya wanted to join Starfleet in order to help prevent other people from suffering such heartache and pain.

She applied herself diligently to her school studies and eventually graduated in the top 10% of her class. After graduation she applied to Starfleet Academy and after rigorous studying/training she passed her entrance exam with flying colors. Four years later she graduated from the Academy with a Major in Tactical and Minor in Security. Once she graduated and went on her cadet cruise, A’Nya was posted to the USS London as a Security/Tactical Officer with the rank of Ensign.