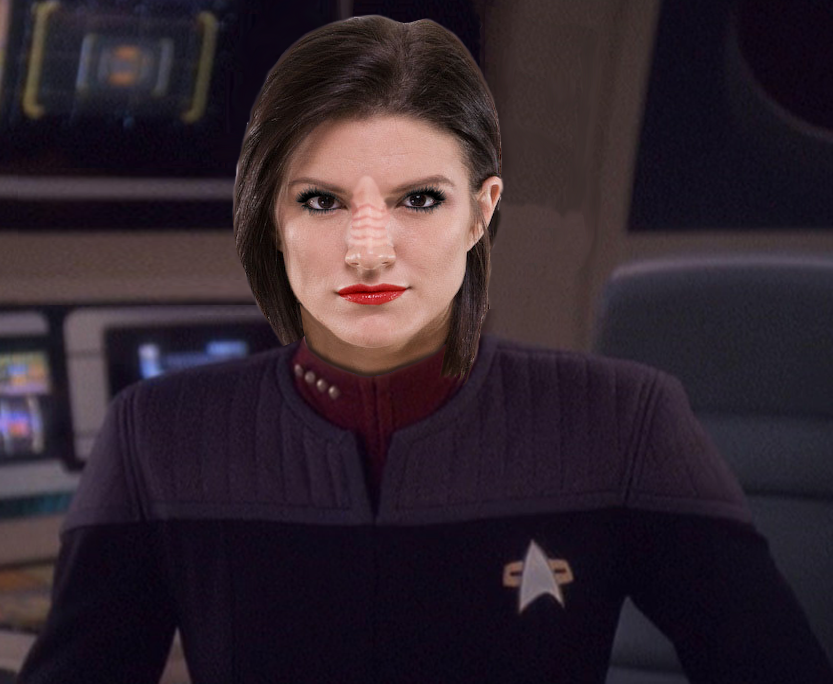 Trenna was born on Bajor in the middle of the Occupation. While she was still very young, her father, Raen, managed to get her and her mother, Kiala, smuggled off-planet on a supply freighter. Kiala made herself useful as a cook on a series of commercial ships. As a result, Trenna grew up in an unusual environment. As she grew older, she learned the basics of running a ship, from swapping worn out power nodes to piloting a ship.

In 2366, Kiala decided it was time to settle down and moved to a colony near the Klingon border. Trenna, on the other hand, signed on with a Bolian-owned freighter company. She worked as a cargo master and pilot. While she was third mate of the Geran’wa, the Cardassian Occupation ended. Now 21, Trenna decided to resign her position and return to Bajor. She wanted to look for her father, who she had no first-hand memories of, just stories Kiala had told her.

Once on Bajor, she quickly discovered that Raen had been killed in a labor camp nearly a decade previous. She thought about returning to freight-hauling, but felt drawn to stay on her birth planet and try to help them recover from the Occupation. So she joined the Militia. Due to the shortage of Militia officers with space experience, she was advanced directly to Lieutenant and assigned to the Helon as helmsman. She was an adequate Militia officer, getting promoted to Captain and reassigned as Tactics Officer. While serving as Tactics Officer, she met the Second Minister, who was impressed with her knowledge of not only tactics but also commerce and trade in the sector, requested Trenna be assigned to him as an attache. In the 11 months she held the position, Trenna was by the Second Minister’s side for some important trade negotiations to bring more economic stability to Bajor.

After the Second Minister lost his office in the next election, Trenna was assigned to the Elanar as helmsman. During this time, the Bajoran government signed a non-aggression pact with the Dominion, at the behest of Captain Benjamin Sisko, viewed by adherents of the Bajoran religion as The Emissary. As a result, the Bajoran fleet was largely grounded. The Elanar was one exception, instead finding itself performing escorting duties for civilian freighters to and from Bajor. She progressed through several positions on the Elanar, ending at Executive Officer, the position she held when the Dominion War ended. Shortly after, she was assigned as the Militia’s attache to the Starfleet Unified Bajoran Command.

Because of her Militia service, she was offered a Starfleet commission, provided she completed officer training, which she did. Upon the completion of training, she was assigned to the Rothschild as Chief Operations Officer. She excelled in this position, enough to attract the attention of the Goshawk‘s Captain, who managed to get Osegan transferred to served as his Second Officer in addition to running the Operations department.

A two year stint on the Goshawk ended when she was appointed the Deputy Director of the Officer of Astrometrics, a position she felt unqualified for as she lacked real experience in the field. The position turned out to be temporary as she was quickly reassigned to the Rothschild as Executive Officer. Three years she stood by Captain DeCanna’s side before she was approached with a chance to work in the Starfleet Diplomatic Corps. Accepting the position of Deputy Director, she was promoted to Captain and helped Admiral Johanna Quentin, a respected first contact specialist and former Federation Ambassador.

A crisis in the Bardeezi Commonwealth saw Trenna temporarily reassigned at Commanding Officer of the USS Altai.