Professional, but shy, Evelyn excels in her work of astrophysics where she is most content. Once she warms up to someone, Ev can be friendly, though social gatherings are still somewhat awkward. Personally, she is a good listener and prefers to aid others instead of maintaining focus on herself. Though shy, she is almost always calm and composed and can be a great friend if need be, however Ev will under no circumstances lend out her books.

A vegetarian since she was a teenager, Ev is slightly underweight for her height. She does exercise regularly, preferring both weights and cardio fitness regimens. Pale and possibly a little anemic, Ev has a very lithe figure, graceful and demure with big brown eyes. Her brown hair is kept short. 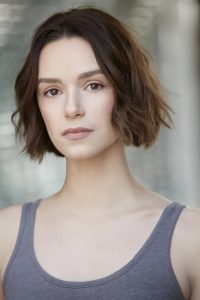 Ev is a private person and must work to maintain personal relationships. Almost Vulcan in her professional life, she wears a mask that exudes a friendly calm. That’s not to say she can’t be friendly. Evelyn, despite her shyness, can be easy going and engaged, though it is a challenge.

Personally, she has a few friends, but no one she calls close. Content to work or find solitude in her off duty hours, Ev enjoys reading, painting and writing an occasional poem.

As a child Evelyn lost her father. As a teenager, she lost her best friend. Later, her uncle, who inspired her to join Starfleet, passed. Abandonment and guilt became companions for Ev through most of her young life. She still struggles with those issues from time to time. 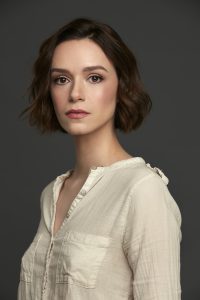 Evelyn Rebecca Sommers, born on February 23rd, 2371, came into the world a few weeks premature. Her parents worried, but she was in good care. For the first seven years of her life, Ev, as people called her, had a normal childhood. Then her father, David Lee Sommers, grew distant and depressed. Years before he had failed to make it as a pilot in Starfleet Academy. When Evelyn was up in age, he tried again and failed again. Mr. Sommers fell into despair and settled in as a dock worker in Rockport, Massachusetts. Though he never expressed physical aggression toward his wife and daughter, Sommers’ despair was additive. As he had failed, so would his daughter. As told by the most important man in her life that she would never amount to anything, Ev retreated into herself. Two years later, David Lee Sommers took his own life.

Rebecca, distraught herself, but undaunted toward her daughter, gifted Ev a book, Charlotte’s Web, a third addiction. The girl took to the old pages like a fish to water. but even as her book collection grew, she became more detached. The one good side effect was that the hobby eventually brought mother and daughter closer together.

School was difficult. As Sommers would occasionally drift off into her own world, instructors were forced to “wake her up” from a daydream. Students teased her and called her names like Zombie, Flake, Airhead, and much worse.

It wasn’t until she met another young girl, Sue Dickinson that Ev really blossomed. The two became best friends and were, for a time, inseparable. They were best friends who shared a love of literature and adventure. The adventure cost them as Sue drowned in the waters just a few feet from Ev’s home. Fourteen years old at the time, Evelyn blamed herself and shut down for many weeks. In her room, she would read or paint or write poetry, but she rarely said a word voluntarily. Her school work declined.

On a whim, Rebecca had her brother take Evelyn on a tour of the solar system.  Lt. Commander Stephen John Sundström had to bend a few rules, but he was able to fulfill his sister’s wish. Ev, who had never been into space, was mesmerized by (as she called it) the majesty of the void.

“It was so big and empty, I thought it could swallow me up and I’d finally be alone. Truly alone.” – Evelyn Sommers

For that reason and a few others, Evelyn decided to join Starfleet even though she knew her journey would be difficult.

The morning she was due to attend her first class, Evelyn threw up. She was terrified due to her shyness. With all the courage she could muster, Ev finally sat in on her first class. The sheer number of students in the room made her dizzy. Eventually, she left early.

The work itself, a focus on astrophysics, was no great challenge. Partnering with other students during any given assignment was a great challenge. Instead of the calm, thoughtful student most saw in class, the unfortunate partner would receive a stuttering, bumbling mess. Ev eventually did make progress, but only after she alienated half the classes she took. Later that year, Evelyn was placed on academic probation until she could overcome her insecurity.

Still on academic probation, Evelyn sought out the aid of a  counselor. The work did help to bring Sommers out of her shell to some extent. Instead of a genuine openness, Ev developed a face to present. As she admired the dedication and calm of her Vulcan instructor, Sommers used such a facade to engage with others. While not the breakthrough her counselor wanted, it did help the woman navigate personable matters.

Determined to branch out, Evelyn joined in the Starfleet Academy Marathon. There she befriended another Junior by the name of Theodora Nance. Unlike Ev, Theo was a free spirit, a bit wild and instilled with confidence. Oddly enough, the two became best friends. They both studied and trained together and eventually moved off campus together.

Evelyn’s Junior year was her best. She excelled at all her courses, and became genuinely personable with other students. Unfortunately, tragedy struck late in the year. First, Ev’s uncle, Lt. Commander Stephen John Sundström, was killed in a training exercise. Second, Theo, Ev’s roommate, friend and lover, left without a word. Devastated, Evelyn nearly dropped out, but after a visit with her mom, Ev rededicated her efforts and applied for a transfer to the Mellstoxx III campus for a fresh start. Ev did compete in the Starfleet Academy marathon where she came in 12th.

With a fresh start at a new campus, Cadet Evelyn Sommers, felt both relief and trepidation. Without a social life, she focused completely on her course load. stellar cartography, thought to be boring by most, became a passion for Evelyn. She loved cataloging stars, quarks, comets, and gaseous anomalies. On the USS Exeter, she was graded highest on SC performance. In General and Bridge Officer training, Ev scored high as well and eventually joined Cadet Squadron Bravo.

At her graduation, Evelyn blushed feverishly when her name was called. As she walked across the stage, she could see thousands staring at her. Old insecurities surfaced until she quickly boxed them away.

Evelyn’s first assignment was on the Grissom class USS Cousteau. The science vessel primarily remained in Federation space, only to be called to battle in dire emergency. No such emergency occurred on Sommers’ tour. The Cousteau’s objective was to catalog quarks, comets, quasars, asteroids, and much more. Evelyn enjoyed her time in stellar cartography much more than her crew mates. The ship did divert a comet on course to the Tarsus IV colony. A study of the comet was made after the diversion.

After four years on the Cousteau, Cadet Sommers was promoted to Lieutenant Junior Grade and transferred to the Elysion class vessel, USS Valkyrie. Made for deep space exploration, the Valkyrie entered the beta quadrant to further study the black hole left by the destruction of Romulus’ sun. Upon completion, the vessel moved deeper into unexplored regions of the beta quadrant.

While surveying an unexplored system, the Valkyrie was caught in a coronal mass ejection. The ship’s shields were stripped and the starboard nacelle was destroyed. The Captain called for the crew to abandon ship. Evelyn was among the 96 (of 120) people who survived. Though it was never proven, scans detected a faint energy signature just before the CME. It is believed a Romulan ship may have caused the flare. For what reason was anyone’s guess.