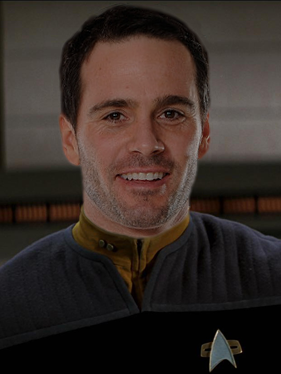 A man of average height Sam stands at 6 foot 2 inches tall. Sam maintains an athletic build through the gym and sporting activities. He was blessed with an average to high metabolism that keeps him from gaining weight. Sam is an easy going fellow that wears a small grin on his face most of the time.

Samuel was born on February 28, 2352 to Benjamin and Kilgena Thompson. Sam is the youngest of 10 children born to Ben and Kilgena. His father is a retired Starfleet Captain turned local shuttle mechanic while his mother, even to this day, is a part time nurse at their local clinic on Gregor IV.

Ben met his future wife while on leave. Ben was in command of the starship Jericho at the time. It was his second command, his first being the Tillman. Ben met Kilgena at a medical conference that was being held at Starbase 48 where he was taking his leave. Ben said he was interested in the conference but he was there to check out the ladies. At one point during the conference Ben approached Kligena and struck up a conversation. Ben asked her to dinner the same night. Ben and Kligena had dinner a few nights during the week of the conference and got to know each other a lot more. Once the conference was over Ben and Kilgena wished each other the best as the Jericho departed from Starbase 48.

They remained in contact over the next several months. When Ben was able to take leave he took it and met up with Kilgena. This time the two never left each other. Kilgena joined Ben on board the Jericho and work as a civilian nurse. The two were married at the end of the year just in time to welcome their first child, Jonathan, into the galaxy.

Sam was born on February 28, 2352. He is the youngest of 10 children. He was quiet growing up. He kept himself busy with his studies and local school sporting activities. Like his brothers he was quite good at sports. He was a tall child growing up, taller than his siblings. He would use his stature to protect smaller kids from bullies.

So at the conclusion of his school career he had a choice to make. Go to the academy and follow in the footsteps of his older siblings and father or go to college and explore something else. He chose to explore something else. He entered university in the field of mechanical engineering. Sam liked tinkering with stuff figuring out how they worked so he wanted to become an inventor and design something cutting edge.

After spending four years at university and one in the field Sam found himself bored and stuck in a rut. He started to feel like all the time he spent at university was for nothing. Taking stock of his life up to that point he decide to leave it all behind and enter the academy like he should have years ago.

He excelled at his studies and quickly made his way up towards the top of his class. Sam was put on an accelerated path due to his previous experience in university and on the job. Taking up martial arts as a hobby to aid in focus it had a secondary benefit of improving his hand eye coordination. A useful trait in the field of engineering. He took extra classes in order to absorb as much information on all things engineering. Sam wanted to be the very best he could be.

It only took two years for Sam to graduate and landed himself a job on a frontier colony called Dinaburg III. Being a small colony he was the only engineer stationed at the settlement. It was a small outpost on the frontier something he relished a great deal. And being the only engineer he got work on not just Federation equipment but local farming and mining equipment. He established a good reputation with the locals which helped the Federation established much needed bonds with the local people.

Sam spent the next six years on Dinaburg III in the small settlement of New Hope. The colony was home to a mining operation on the other side of the planet and farming on the rest. It was a place where people would go to get away from the big populations like those of Earth. It wasn’t long before he fell in love with a fellow officer.

Her name was Maya and in his eyes she was the most beautiful woman in the galaxy. Their courtship didn’t last long as they were married within a year of when they first met. Sam liked the idea of settling down and having a big family like the one he grew up in. And Maya was of the same mind set. But getting pregnant and staying pregnant was a hard thing for the couple.

Things were going okay until one day in 2381 that changed their lives. Massive planet wide quakes and extreme weather rocked the planet. Scientist couldn’t explain why it was happening, what was causing it or how to stop it. It was as if the planet was ripping itself apart and it was happening on two other planets in the same system. Some locals blamed the mining operation for going so deep that they split the planet in two. But those claims were unfounded. After those events Dinaburg III was no longer habitable.

Sam was reassigned to the Dubai shortly after the evacuation. Maya was assigned to the Kiev. Both ships were science vessels working in the same area of space. They communicated several times a day and made plans to meet up whenever possible.

It wouldn’t be another year before Maya was reassigned to the Dubai with her husband. After she settled in to joint quarters they started to try again for a baby. But after more heart ache of no conception the two settled on focusing the relationship on the two of them.

During his time on the Dubai Sam made quite the impression on the senior staff and engineering crew. They had originally though they were getting some second rate engineer from the back waters of the Federation but they got something greatly different. Within the first year on board Sam developed and implemented improvements to how the ship handled its power. He increased the output by 3.5% and efficiency by 7.2%.

In 2384 while studying gas anomaly’s near the Cardassian boarder the Dubai got caught in a vicious ion storm. It took the entire engineering staff to hold the ship together. After only a few minutes the storm had passed and the ship was badly damaged. The ship lost a nacelle and several decks had massive hull breeches. Emergency shields keep the insides of the ship from flying out. It was later discovered that it could have been a lot worse but thanks to Sam’s improvements everyone made it through.

The Dubai was tugged into space dock in 2384 and was deemed too damaged to be repaired so command decided to gut the ship and use the still good parts on other ships. This left Sam and Maya without an assignment. Reading the reports of Sam’s ingenuity Captain Higgins of the USS Dell wanted him on board.

Things aboard the Dell were going smooth. Sam and Maya were never closer they had met and became great friends with many on the crew. Life was pretty good for the two. That was until one fateful day in 2387.

Sam and Maya were assigned to an away team to a planet called Trippock V. It was a survey mission to find out what if anything grew on the planet. The team was wrapping up for the day and getting ready to move equipment back onto the shuttles that took them to the surface when Commander Juri out of nowhere and out of character attacked Maya. Several people saw it and separated Juri from Maya. By the time Sam got to Maya she had lost too much blood and passed on in his arms.

At that moment something snapped in Sam. Rage and hatred filled his very being. He turned towards Juri and lunged at him. Sam had tackled Juri to the ground and was punching his face in under a half second. No one could have stopped him. Sam just kept swing his fists into Juri’s face until the red of his uniform match the color on his face. It took a security officer with a high stun setting to incapacitate Sam.

Commander Juri survived the beating but his face was never the same. Sam was confined to the brig until the ship could get to the closest Starbase. Command didn’t let Sam make arrangements for Maya’s funeral. Her parents came and got her remains not before visiting Sam and thanking him.

At the court martial eye witness accounts claim Juri had no memory of attacking Maya just before Sam attacked him. Sam didn’t care for the explanation, Maya was dead and Juri was still living. There would be no forgiveness from Sam. Sam never liked Juri. Sam observed Juri making passes and hitting on Maya every chance he got and got touchy once which prompted Maya filing a complaint against him.

Another team continued the research on Trippock V and a similar incident happened but that team was more prepared. It proved that perhaps some alien entity inhabited Commander Juri’s body and attacked Maya and that maybe a similar entity inhabited Sam and attacked Juri. Sam knew full well what he did to Juri was his doing and not some alien entity. But he never said a word to confirm or refute their scenario.

At the conclusion of the trail Commander Juri got an early retirement with full benefits. Sam was dropped in rank to Lieutenant as well as reassigned off the Dell and his record got a big red flag added to it. After grieving for his wife for several months it was time to get back to work, but would anyone want damaged goods?