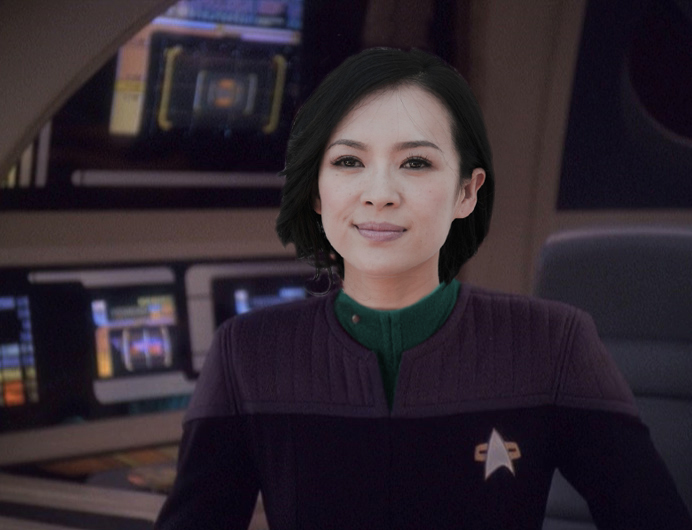 Dr. Rosalind Lam is the Chief Science Officer aboard the USS Cavalry.

Rosalind Lam was born in the city of Montreal on Planet Earth. Hers was a creative family; her mother was an actor who portrayed characters in quite a few popular holonovels and her older brother became a painter. Ros’s favourite memories from childhood were when she and her brother would play music together on the deck of their cottage.

Unfortunately, she didn’t know much about her father. He was a prominent businessman, a curious profession given the economy of the Federation, which meant that the Lam family spent a great deal of their time outside of core Federation space.

Upon graduating from High School, Ros attended the Daystrom Institute, gaining an Honours Degree in Astrophysics. The Daystrom Institue pushed her to her limits, and while she (barely) graduated with honours, she quickly realized that the sedentary existence of a research scientist was not for her.

As a child she would spent her nights gazing up at the stars and falling asleep with a novel filled with tales of adventure. But what fascinated her about the tales wasn’t exactly the swash-buckling quests the crews of those ships embarked upon, rather it was the knowledge that the most incredible thing in the Universe could be out there, waiting to be discovered. Waiting for someone to stumble upon the next greatest discovery.

It was fitting then, that she decided, much to her family’s chagrine, to apply to Starfleet Academy. Her father, especially hoped that he would eventually pass the torch down to her and run his business when he retired. He thought that the life of a Starfleet officer was one of loneliness and would not fulfill her later in life.

He is waiting, ever patiently, to be proved wrong.