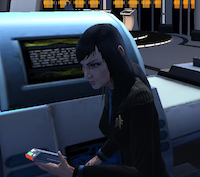 Katara was born on Romulus and always had a fascination on Terran cultures. So she made her way up through her academy on Romulus and made some postings on some ships to travel near the Neutral Zone to see her first Federation ship. Katara had moved on to Starfleet Academy to learn more in the medical area and moved on to the USS Cavalry for a real taste of the adventure of being in the Federation amongst the human population...

Katara was born on the Romulan Homeworld Romulus in 2332 and was nothing but bombarded with the Federation as enemies from anyone she talked to including other classmates when she was a child.

With many against the Federation, Katara found the human race fascinating so she started to secretly gather information on the human culture and their customs. During the years into the Romulan Academy, she made ample attempts to understand the human forms better so she decided to take up biology and get into the medical sciences on Romulus.

While in the Academy, Katara learns that the Federation was starting to maintain close ties to the borders and after she graduated applied to place as a medical technitian on a Romulan ship that go along the borders as her curiosity is in full gear with the human civilization.

Katara is accepted onboard the T’Meri, a Romulan scout ship that patrols along the border regularly. She gets her first taste of the human culture when a lone human was caught along the borders of Romulan space. Katara was the medical officer in charge to scan the Human and examine him to the fullest detail. She felt the urge to bond with him and this was the first time ever as a thrust into the Human sexuality of the Human male as she found him fascinating. He is sent to the Romulan prisons and she is partly saddened to see that happen.

With more years under the same command of the T’Meri, the ship is disabled by some unknown source and is rescued by a Romulan D’Deridex class ship, the T’Vemchi. The commander of the vessel takes Katara under his wing and makes her the chief medical on his ship.

Katara is stationed with the T’Vemchi into the Dominion War once the Romulans entered into the war against the Dominion in 2374 and she makes each attempt to learn more on the Human cultures. She had a chance to visit DS9 while the war was still going on and witnessed a variety of cultures interacting which made her more perceptive to working together with many species of the Alpha and Beta Quadrants.

Katara remains with the Romulan ship T’Vemchi until she learns of a harder instability of the Quadrant when the Borg start the ramifications of a massive suicide run into the Federation in 2381. The Federation is near crippled at that point due to the Borg attack and Katara makes the move to submit her application to the Federation Starfleet Academy.

While waiting to be given permission to enter the Academy, Katara serves as a civilian medical officer on the station Sierra 39 perfecting her ways to help the Humans and Romulans alike. While on the starbase, she learns of the Romulan system being destroyed and she helps any and all Romulans that come their way to the station.

Katara enters the Academy in 2389 and is placed into Starfleet Medical training so she could learn the practices of Human medicines. She becomes well versed in the different concepts and varieties of the practice and with her recent experience on Romulus, is called into action as she graduated the Academy with honors in biology, exobilolgy and the medical knowledge of most species now.