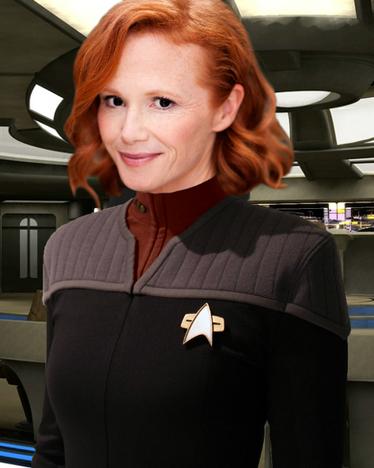 Alenna (Lenna) Jensen has been around and while she was attached to diplomacy but her priority was always as a special aide at the highest of levels. She was pulled off normal duties to assist first with Rear Admiral Diego Macedo after they created Helios Colony. After her stepped down and Lt General Jagged Anderson was brought in he kept her there to assist with whatever was needed since he wasn't really a person who could just talk to anyone. He was a Marine and that's what they needed in the tumultuous times after the Borg attack. She had thought that would be her last post would be Helios Station. However they had a special job that the Commander had to do. She was asked to go and become the XO of the USS Equinox. She didn't know what to expect and still doesn't.

Alenna grew up on Beta-Z with her mother and father. Her father was a minor diplomat and her mother was part of the intelligence community. With her parents constantly away she always stayed with her Maternal Grandmother who looked very similar to her.

She was a lonely child as her parents were always busy and her sister was much older than her so was already away at school studying. Amber had decided to leave Beta-Z and to travel to the Academy to become a counselor. She didn’t want life of her parents and wanted to find something different. She has a very weak bond with her sister,

When she was 13 she began to feel that she was different as her Empathic and Telepathic abilities were starting to blossom. Her Grandmother trained her in the ethical use of her abilities stating that reading another was an intimate experience as you never truly lost the feeling of being in someones mind.

When she was 16 she applied to Startfleet Academy where she would be accepted the first time she applied. During her time there she was neither the best or the worst, She was middle of the road and in some cases she squeeked by in the classes.

Because of her abilities she was put in Special Operations of the Intel division where she trained to be an undercover agent. She spent the first few years in deep cover missions on different worlds so that she could learn what they were hiding from the Federation. She disliked the spying and realized that life undercover wasn’t for her.

She was 25 when she left that to be taken back to Starfleet Academy and trained again but this time as an analyst and investigator. She spent the next 9 years being an investigator and analyst for Starfleet Intel but after a while she knew that she needed to spread her wings and move forward.

She was then put in with JAG as a Junior Investigator. She loved doing this and slowly she began to earn a lot of respect in the field she was being promoted. By the time the call came for her to go to Delta Quadrant she was already in charge of many investigators. She would be the chief investigator for the JAG operatives in the Delta Quadrant.

She was very pleased and based off of Starbase 900. Then came the fateful attack where the Borg went after The Round Table again to gain a foothold through the Solaria Gateway. During the battle as she was being evacuated she was injured and was in a coma for 3 weeks. When she came out everything had changed. They were cut off from StarFleet and everything that they knew. Her husband and children were in the Beta Quadrant with no way to know if she had lived.