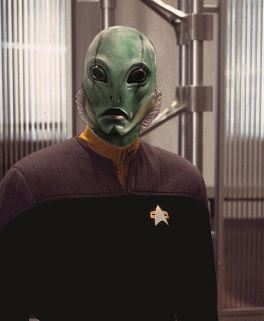 Ke is one of the first candidates on his homeworld to venture beyond the Briar Patch. He is descended from ancestors who migrated to extraterrestrial colonies during the Nemu Reconfiguration, and like most colonists was raised with a desire to leave the waters for the stars. He is also a first generation Starfleet graduate and also one of a handful of Nemu graduates working outside of the cybernetics sector as part of a Nemu Exploratoratory Circle/Federation initiative. This officer has a unique physiology and preparatory training and is cross-trained in multiple departments. However, Ke is part of a post-Dominion War graduating class and has less in-field combat experience than active veterans.

Five-hundred years ago a rogue planet collided with the Nemu sun, causing a catastrophic  increase in solar radiation that irradiated their planet’s surface. Lethal to life on the surface, the Nemu retreated underground seeking shelter from the worst of the radiation. Living in cramped unsafe conditions, disease soon began to kill off the populous until only a few thousand remained. Due to the planet’s tilted axis, the brunt of the radiation blanketed the northern pole, dissipating gradually near the equator. Less lethal radiation levels near the southern pole allowed survivors a chance at rebuilding their civilization. This 200-year period was known as the Reconstruction, and notably was an era of vast scientific advances. With their greatest minds assuming leadership, the Nemu staged a global rescue and recovery effort, heralding breakthroughs in medicine, artificial limbs, and organs , then finally full body replacements for those injured by radiation. Eventually, the Nemu developed a means of transferring their consciousness into synthetically engineered organisms that could once again walk the surface, and rebuild their homeworld. However, due to decades of radiation exposure, the surviving generation of Nemu had become sterile.

Turning once more to science, the Nemu used genetic engineering to determine the course of their own evolution, In the period known as the Reconfiguration, the Nemu migrated toward the tropical climates of the southern polar region, searching organisms that had survived the Reconstruction. Through genetic engineering and cybernetics, the Nemu were reborn as a cephalopod-based lifeform.

Today, Nemu is a thriving Federation planet, with strong tourism and cybernetics sectors. Because the planet has been sequestered by the subspace effects of the Briar Patch, it has evolved largely on its own without the aid of the galaxy and was one of Starfleet’s first contact candidates in the region. The Reconfigured Nemu is on average .25 meters and weighs an average 40 kilograms, with striking morphological differences in muscular and skeletal structure from person to person – largely because post Reconfiguration favored genetically modified specialization.

Candidates are allowed to construct the appearance of their synthetic hosts to suit their personal tastes and specialize in a preferred skillset.

Every model is powered by regenerative bioelectric cells and can operate for over 8790 hours in most conditions, before requiring an emergency recharge. Most Nemu living with Federation species adapt to a dominant sleep cycle, recharging their bodies during off-duty hours, so as not to disrupt other species sleep patterns.

Most Nemuns often ingest a nutrient rich fluid designed to mimic the sea kelp found in the waters of their home world, although some elect to capture and prey on actual microbial sea life for consumption. However, unlike many other indigenous Nemu life, they are unable to digest solid foods. It is not unusual to find groups of Nemun consuing alcohol or synthehol aboard Federation promenades, as their bodies can convert alcohol into energy! Due to its adverse effects, Nemu are unable to process caffeine as it severely affects the mental pathways linking Nemu with their synthetic hosts.

The Nemu are engineered with a tactile-psionic defense mechanism that produces a deleterious effect on many neurological systems. This is painful for the attacker as well as the victim — as is the nature of all psychic interaction feedback. An individual Nemun can recover much more rapidly from traumatic events if bonded to a group of Nemu or even a unique person.

It is a common misconception by other humanoids that their synthetic bodies provide the Nemu with superior strength, speed, and intelligence. Although a Nemu body to travel or withstand higher-than-average velocities and forces, it is unadvisable. The artificial bodies were originally designed to inhabit inhospitable environments of their homeworld. Additionally, all Nemu bodies are designed with built-in fail-safes to protect the organic inhabitant and prevent dangerous actions that would be harmful to their environment and peers.

Sexual tastes and practices have changed dramatically since the end of the Reconfiguration. The importance of gender in the Nemu culture is strongly tied to its past history of genetically-modified procreation and continues to change as the Nemu interact with cultures outside its homeworld.