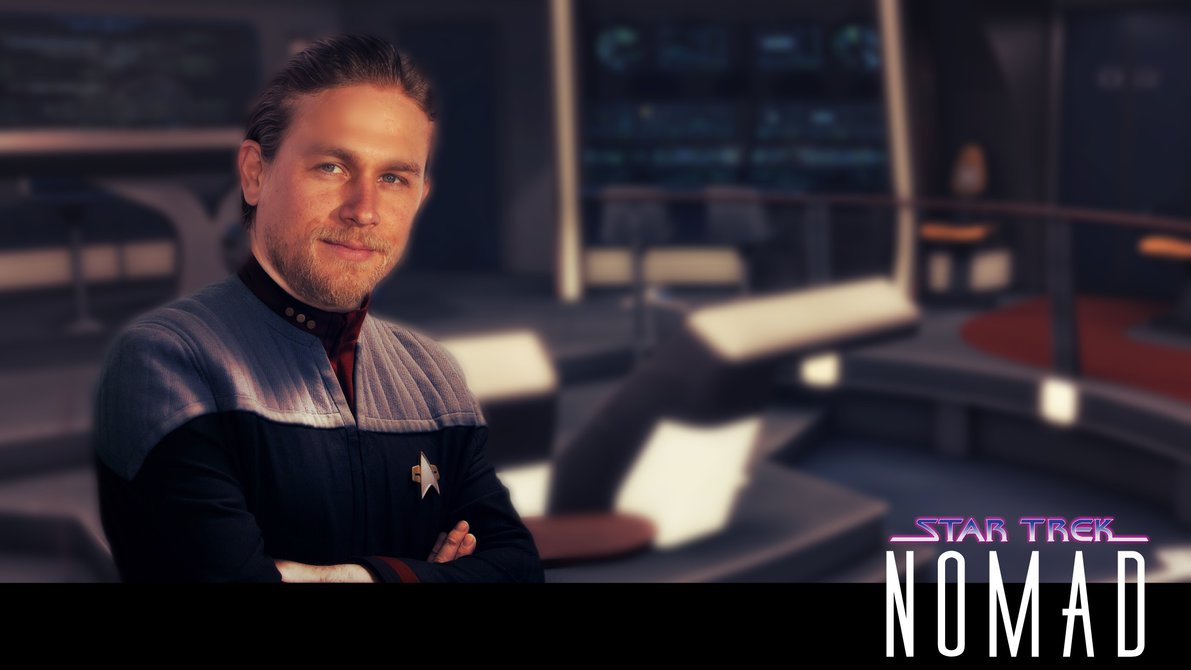 Christopher, 'CJ' Dynehart is the first officer aboard the starship Nomad. Son of a Starfleet admiral, Dynehart is one of the few members of the Nomad's crew with a distinguished service record and whom was hand picked to serve aboard the Excelsior-Class starship by the admiralty.

Childhood:
Christopher was born aboard the starship Odyssey in 2334 to Admiral Maxwell Dynehart and Alyssa Jane Dynehart, a civilian scientist. He was somewhat unexpected, but loved and wanted nonetheless. Alyssa gave birth to Christopher during a survey and exploration mission to the Typhon Expanse; the ship came under attack by a rogue Klingon Warship and Alyssa almost died during childbirth. Thankfully, due to some creative and imaginative medical procedures thought up by Katherine Pulaski, the ship’s chief medical officer, Alyssa and Christopher were both saved.

Christopher, or ‘CJ’ as he became to be known by the crew of the Odyssey was the first child born aboard the ship and understandably became somewhat spoilt by the crew. The mission to the Typhon Expanse lasted nearly three years and it was a further two before the Odyssey returned to Earth. CJ was initially sceptical to return to Earth however, his older sister, Callista Dynehart made sure he’d be looked after.

After five years in space, Alyssa Dynehart, CJ’s mother opted to remain on Earth to bring up her and Maxwell’s son in a safe environment. Christopher was enlisted in a very prestigious school in Oxford, England and as he passed each grade, he was well thought of by his teachers. Chris made friends very easily and still remains close friends with some of his childhood school friends to this day.

Chris’ relationship with his father became all but non-existent as Maxwell became heavily involved in the latter stages of the Galaxy-Class design project at Utopia Planitia on Mars. By the age of fifteen, CJ often joked that he could count on one hand how many times he’d seen his father over the last ten years. This also put a strain on Alyssa and Maxwell Dynehart’s relationship and ultimately what caused them to become divorced in 2351

At the age of seventeen, Starfleet Academy ran a recruitment day at his secondary school; initially not overly keen to follow in the footsteps of his father and sister, (who by now was a captain of her own ship,) Chris believed that he could be the officer that his father never was. CJ was sponsored by the headmaster of the school, a retired Starfleet commander by the name of Jason Dyson and was destined to set out on his journey to Starfleet Academy some four months later…

In the four months of graduating from secondary school, a few weeks before his 18th birthday, Chris, who had kept his intentions of leaving for Starfleet a secret from his mother finally confessed his dream to be a captain, to command his own ship and still have time for his family. Alyssa was not happy about his decision to keep this from her however, she understood his reasoning and gave him her blessing.

Two months later CJ met Alicia Monroe and fell head over heals in love with her -the pair had a whirlwind romance and with the permission of his mother, who incidentally, quite liked Alicia, the pair spent the following two months travelling abroad. CJ and Alicia travelled to Australia, New Zealand, Lunar and Io. Upon returning home, the pair were given quite the lecture about going off world however, Alyssa was trying her best to be the ‘good parent’ despite understanding as to why they wanted to get away.

The day before he left for The Academy, CJ met with his father in San Francisco -the meeting did not go well; Chris disagreed with his father’s actions over the past few years and made his feelings known that he was unhappy with how Maxwell had treated his mother. He tells his father the reasons for him joining Starfleet, that he will be a better man than him and that he wants nothing more to do with the man, as a child he looked up too.

The Academy:
Despite being a typical ‘Grade-A Student’ throughout much of his academic life at school, Chris found The Academy difficult. Whilst excelling in tactical, security and athletics, CJ found the sciences difficult and was subsequently enrolled in the Young Tactical Officers Programme where he excelled in his first year.

Chris maintained his friendship with Alicia despite having agreed to end their relationship and also made several life long friends at the Academy during his time there.

By his fourth year, Christopher was assigned the honour of serving aboard the USS Colton, was respected by the senior staff and assigned to the ship’s armoury where he was able to put a classroom project into practice and improved the guidance systems on the ship’s new photo torpedoes.

Upon returning to the academy eight months later, Chris received a commendation for his work aboard the Colton however, he was reluctant to accept the award upon learning that it was to be presented to him by his father…

Early Career
Chris graduated The Academy with the rank of lieutenant junior grade and assigned to Deep Space Four -a space station located in the Lidara Sector, close to where Christopher was born, near the Typhon-Expanse.

Following his time at DS4, Chris was assigned to the starship Atlanta where he served as the ship’s auxiliary tactical officer.
During a particularly difficult mission to rescue the inhabitants of a planet who’s sun was about to go nova, the Atlanta was attacked by a fleet of Breen warships. Several members of the Atlanta’s senior staff, including the ship’s first officer, opps officer and chief medical officer were killed. Rachel Ross, the ship’s captain gave Chris a battlefield promotion to the rank of lieutenant commander and made him first officer during the crisis…

The Atlanta limped back to Starbase 134, in the Rigel System where the vessel underwent a six month extensive repair schedule of which, Chris oversaw the refit of the New-Orleans class starship.
Rachel Ross, the ship’s commanding officer was re-assigned as was were the remaining senior crew.

The following year, Chris took a leave of absence upon hearing of his mother’s failing health. Alyssa had many dreams to travel across Earth; Chris planned to take his mother on a whirlwind trip across Asia and Australasia however, she passed away suddenly before they had a chance to make the trip.
Callista, CJ’s sister also having taken a leave of absence returned to Earth and the pair took the trip together that Chris had planned for his mother.

Chris remained on the recall list for Starfleet for years, turning down assignment after assignment to head back into the final frontier until he was approached by his father, Admiral Dynehart who gave him an ultimatum: leave Starfleet for good or to come back, to make a difference and to become the man he always wanted to be.

Chris agreed and was assigned to the starship Roger-Young as first officer right up to and during the Dominion War.

Aboard the Roger-Young, Chris fell in love with the ship’s Science Officer, Kell Perim, a joined Trill. Perim died during the battle to retake Deep Space Nine however, Chris did not allow for this to put his life on hold. He learnt from the experience and grew into a stronger, more resilient officer and man.

After the Dominion War, Chris served on Deep Space Nine for a brief period, before being assigned to a two month mission to the Gamma-Quadrant. Following his return to the Alpha-Quadrant, CJ, now on the cusp of being promoted to commander was assigned to a secret project to refit an old Excelsior-Class museum ship for a mission known only to the admiralty…

Miscellaneous:
-Chris is 1.85 meters tall, rusty blonde hair, hazel coloured eyes and often sports a goatee beard.
-He takes pride in his appearance and has a chiselled physique.
-CJ is very much ‘calm under pressure’ and is a quiet man -often reserving judgement or thinking before he speaks.
-Christopher is capable of ‘keeping his cool’ and would take a lot to break his composure.
-Despite his time at The Academy, Chris at the rank of lieutenant commander is well versed in a wide variety of shipboard operations and whilst not having much interest in the sciences is a formidable tactical officer, prolific leader and well respected by his peers and the admiralty.
-CJ has many interests, he enjoys sports and is a keen footballer and runner. He loves 19-22nd Century Earth Cinema and is very much a romantic.
-Chris still maintains his friendships with his childhood and academy friends, often meeting with them throughout the year and writes to them often.
-Christopher Dynehart is a proud man, his values strengthen him and despite thinking before he speaks, can often act without thought to ensure the safety of his crew…