Took eight years to complete her training and schooling at the Starfleet Academy.

Commander Fergouson is a by-the-book officer on the bridge, but if you catch her off-duty and/or out of uniform, you’d think otherwise. Her upbeat demeanor makes others believe that nothing can go wrong, even when it does. Having previously commanded her own ship, she believes she belongs in the central seat in the future. Love had never occurred to her until recent events forced her to voluntarily rejoin Starfleet due to the Captain of the ship that had responded to her contact with Starfleet. 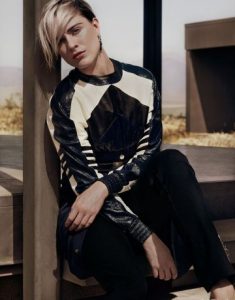 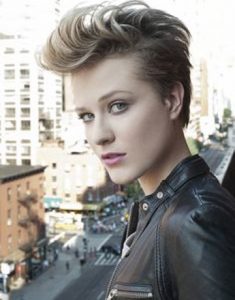 Debrah stands 5’7″ tall and weighs approximately 120 pounds. Her hair is typically cut in a “bob” style, with the longer strands bleached blonde and the sides shaved or chopped short. Outside of her quarters and while not on duty, she prefers to dress in black leather jackets and civilian attire.

Because of an incident that occurred while she was still a teenager, she holds herself to higher standards than most people in her position.

Sueanne and Branch Fergouson were both members of Starfleet in some capacity. Sueanna worked as a Botanist on a Jupiter Class station. Branch, her father, worked as a Security Officer on the same station. This is where Debrah’s parents met for the first time.

Debrah was born in 2354 in Asheville, North Carolina. Sueanna and Branch had requested that their child be born on Earth, and their request was granted.

Debrah’s childhood was typical of children raised on the Federation’s capital planet. There was never a need that was not met, nor was she ever neglected because such things did not exist. Her education was unique because her parents had arranged for her to be tutored and mentored on their private estate on the outskirts of Asheville.

Disaster struck in 2367, while Debrah’s parents were away from Earth. On her 13th birthday, while her parents were away, she was alone in the estate when she was contacted by a Starfleet Command official about the battle of Wolf 359. Her mother and father had been on the USS Chekov, which was later destroyed by the borg at sector 001, though that part had been left out of the review given to Debrah’s aunt, who was at the estate when the news about Wolf 359 was received.

Following the events of Wolf 359, Debrah relocated from the estate on Earth to the Luna colony of New Berlin, where she lived with her aunt. She completed her education in New Berlin and then applied to Starfleet. Debrah, on the other hand, took the Starfleet Academy Preparatory Program after her Junior year of high school and passed it with an above-average score.

Debrah began her Academy years as a Freshmen in the fall of 2372. She had no idea what she wanted to do and after a week of going from course to course, she decided to study and major in Natural Sciences with a focus on Stellar Cartography.

This time, she went to Social Sciences with a focus on Criminal Justice, where she felt more at ease and comfortable with the challenges that the major presented her with.

After feeling a calling from the Law side of the fleet, she decided to further her studies in a professional field after completing her final major and focus in the Academy. In 2376, she took her Bridge Officers exam at the request of her Law professor and passed it; she also took her final exam for her Bachelor’s Degree and passed it with flying colors. As a result, she received her letter of achievement and was promoted to the rank of Ensign.

Debrah studied harder than she ever had at the academy for the next four years. She was determined to memorize every law, from the legal principles, procedures, and processes that governed and were applied to Federation civil and military citizens to the interstellar laws that govern the relationships between sovereign planetary and interplanetary governments such as the Klingon Empire, the Federation, and the Cardassian Union. After the four years she took her Law exam and passed it; earning a JD in Law, as well as the rank of Lieutenant Junior Grade.

Debrah was assigned to Starfleet Command and the Intelligence Division after completing her training and schooling at the Academy, where she was assigned to Admiral Klark as his Judge Advocate. She worked for the Admiral for five years, ensuring that all legal processes and procedures ran smoothly.

Debrah accompanied Admiral Klark on his flagship, the USS Siri, as he headed to a border dispute in 2385. However, while this was going on, the Tal Shiar cabal Zhat Vash used compromised synthetics to launch an attack on Mars, destroying the Utopia Planitia Fleet Yards as well as a rescue armada that was under construction there and intended for Romulus. Debrah had intercepted a transmission from Starfleet’s Intel Division and relayed it to Admrial Klark. It described how the Tal Shiar had compromised the synths. Debrah was promoted to Lieutenant for her assistance in the matter.

Following the events on Mars, Debrah realized that her legal skills would be even more useful aboard a ship. In 2388, she requested a transfer from Starfleet Command to the USS Triumph. The request was granted, and she was given orders to report to the Triumph as an Assistant Chief Security and Tactical Officer; a year later, when a position opened up, she was promoted to Chief Sec/Tac.

Klingon vessels claiming to be part of the Sovereignty of Kahless attack and destroy Xavier Fleet Yards in 2391. As a result, Starfleet and the KDF joined forces in an operation known as “Operation: Gatecrasher,” in which Debrah led an away team that successfully penetrated the defenses on one of the Sovereignties’ homeworlds, causing their leadership to fall in combat. Debrah was promoted to Lieutenant Commander for her actions under combat stress and conditions, she also received a Legion of Merit for exceptionally meritorious conduct in the performance of outstanding services and achievements during the operation.

Debrah is promoted to Commander and Executive Officer in 2394 after the former XO is killed on an away mission. This battlefield promotion marks the end of her Starfleet career; two years later, she submits her letter of resignation and retires in 2396.

Debrah takes over as Captain of the UFP Torgus in 2397 and begins her career as a Freighter Captain. For the past two years, she has been transporting cargo in the Federation’s Alpha and Beta Quadrants. Until 2399, when her ship’s computer locks out with an Omega symbol while returning from a colony on the outskirts of the charted area of the Gamma Quadrant. When she contacts Starfleet, she informs them of the situation and is advised to keep an eye on it until a ship arrives.

Debrah finds herself in the presence of Captain Vausees Vax, the Commanding Officer of the USS Heracles, after the situation has been resolved. Recognizing that she has found a missing piece of herself in this woman, she rejoins the fleet as the Heracles Chief of Security and Tactical Officer.