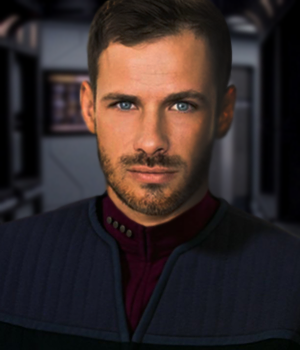 Axon is a tall man with brown hair just in the beginning stages of receding from his natural hair-line. His half human genetics gave him crisp blue eyes rather than the pitch black that is typical of a Betazoid and he can usually be found with stubble on his face rather than clean-shaven. He tends to keep toned and fit from working out in the gym and running, though he is not a fan of sports.

While aboard the Jach’raT, Axon was exposed to massive amounts of radiation on an away mission, and since then was diagnosed with the Betazoid disease Rithectirosis. He is currently in the diseases first stage and is maintained by a weekly medical regimen from the ship’s Chief Medical Officer.

Father: Kezek Vendrest was a Betazoid Starfleet Pilot and eventual Commanding Officer of the USS Panen’Hu. During the Dominion War, Kezek’s ship was lost with all hands.

Mother: Joni Vendrest was a Lieutenant at Starfleet Medical. Being a Doctor was her passion, until she had her first child, Axon. After that, it was just a job, and her family was her priority. Joni died giving birth to her second son, Ibin.

Brother: Ibin Vendrest is three years younger than his older brother, Axon. Growing up, Ibin was inclined more towards his scholastic accomplishments. Rather than attend the Academy, as his entire family before him, Ibin instead chose to attend Cambridge University, getting his degree in mathematics. Ibin is now a professor at the University of Betazed.

Axon has a very protective nature that stemmed from a lifetime of caring for those around him. This nature has fostered a deep desire to be a father, though that dream has yet to be fulfilled. Until then, he sees his crew as his children, and tries to protect them at all cost. Though that protective nature does not translate to his own self. Axon is a major thrill-seeker, even at his own risk. Axon followed in his father’s footsteps and became a fighter pilot, finding the rush to be one of the biggest thrills he’s ever found.

He is also known as a smooth talker. With the use of his half-Betazoid empathic ability, he can easily test the other person’s emotional state and present his information in a way that they’ll be more receptive. This tactic has also served him well in the diplomacy field when brokering a peace treaty or engaging in first contact.

His own emotions are another story entirely. Axon tends to be withdrawn and keeps his emotions hidden from those around him. Being that natural protector, he always feels the need to put on a good face for the rest of his crew. Axon categorizes himself as the strong head of the crew and as such should never show weakness.

Axon’s main interest is flying. Even now that he no longer sits in the pilot seat, he does miss it. He enjoys running multiple holodeck programs, including a few that help him relive the days in the cockpit. He also enjoys fine whiskey but doesn’t like to drink alone. Axon also enjoys to read books rather than holo-novels, as he enjoys the use of his own imagination.

Axon Vendrest was born on April 21st, 2351 to Kezek and Joni Vendrest aboard the USS Destiny. With the birth of their first child, the Vendrest family requested a transfer to Earth to try and provide a stable life for him. Three years later, Ibin was born. Ibin’s birth was difficult and Joni Vendrest did not make it. Joni’s death had a major impact on the Vendrest family, most notably their father. Kezek, who had taken a job at Starfleet Aeroscience requested a transfer back into fleet service and moved his family to the USS Starlancer.

The Starlancer was a big change for young Axon, who was mostly used to their home in the south of France. Growing up surrounded by bulkheads was something he had issues getting used too. His father became very reclusive and tended to work long shifts and even pulling doubles, leaving the young Vendrest boys in the care of a young lady named Rachael Delcox. From a young age, Axon would take care of his younger brother, always making sure he was entertained and cared for properly.

This attitude continued as the two grew into adolescence. Even as they began to drift apart and develop their own interests, Axon was always looking out for his little brother. During their mid-teens, Kezek Vendrest received a promotion to Executive Officer and they transferred to the USS Benevolence, a Galaxy-class vessel.

When Axon turned 18 and graduated from high school, he made the difficult decision to leave his brother and attend Starfleet Academy. This was incredibly hard for Axon, as he had spent most of his life taking care of his brother, but Ibin almost insisted that he go. With a heavy heart, but glad knowing that his brother wanted him to go, the young man applied to the Academy and was quickly accepted into the Aeroscience program.

Axon excelled when it came to his studies and he quickly chose a small aircraft specialty. In his second year, he was chosen to become a member of Nova Squadron becoming one of the youngest ever accepted into the group and one of the few to be a member for more than a year or two. Near the end of his time at the Academy, the Federation declared war on the Dominion and Axon found himself receiving orders to join the 5th Attack Wing as they headed for the front lines.

War was not something the young Betazoid had prepared himself for. While he enjoyed the thrill of fighter combat, the carnage that he witnessed would forever have an impact on the young man. During a particularly difficult conflict, the Squadron Commander’s fighter was destroyed and Axon was asked to take his place and lead the group throughout the rest of the war.

As the Dominion War came to a close, autonomous fighter wings were no longer needed and the 5th Attack Wing found themselves being integrated into the USS Haffley, a Concorde-class vessel that was stationed in the Gamma Quadrant. The Haffley’s mission was to show a strong Federation presence in the area while protecting its assets. Axon kept his position as Squadron Commander, but after a few years was promoted to Commander of the Air Group.

As CAG, Axon found his circle of acquaintances broaden and met a young Chief Engineer by the name of Alexzander Kaz. Alexzander and Axon grew very close and they soon formed a romantic relationship. In the spring of 2381, Alexzander proposed to Axon and the two set a date to wed for the following winter. But fate had other plans. On an away mission to an uncharted planet, Alexzander was infected by an unknown virus and he became very sick. Upon contacting the Symbiosis Commission, they made the decision to remove the Kaz symbiont to save its life and to return it to Trill. Between the symbiont removal and the virus, Alexzander passed away in Sickbay surrounded by his friends and his finance.

Axon took a leave of absence over the next year. During this time, he returned the Kaz symbiont to Trill and went to Betazed to spend some time with his brother. After a few months, he returned to Earth and moved into the family house in Marseille, France. After much soul searching and grieving, Axon decided it was time to return to the Fleet. The decision he made was not an easy one. He decided that his new goal was to be in Command of his own vessel. He felt that in this role, he could try to do more to protect those under his command than he could in his current role. Axon decided to transfer departments from Air Group to Starship Flight Control and accepted the offer of Chief Flight Control Officer aboard the USS Infinity.

The Infinity definitely wouldn’t have been on Axon’s top ten list of assignments. It was uneventful and the crew never quite bonded in a way to make lasting relationships. But Axon understood that the assignment was merely a means to an end and endured the dreadful position he held. After a few years, Axon received a promotion and transfer to the USS Jach’raT as its new Executive Officer.

When Axon joined the Jach’raT, an old Ambassador-class vessel, he found a big surprise when he met the Chief Engineer. Lieutenant Commander Lorel Kaz was a female Trill who had been the Kaz symbiont’s new host for the past few years. While the situation started awkward, and stirred a lot of old feelings for the new Executive Officer, the two began to rebuild their relationship as separate people and Axon found a close friend in Lorel. A few years later, Lorel set Axon up with the Chief of Science, Eryn Anahr, and the two hit it off quickly. After a couple years dating, Axon proposed to Eryn and the two were wed.

Not long after the wedding, Axon went on an away mission that went awry. The runabout was pulled into a spacial anomaly that drenched it and it’s passengers in gamma radiation. Upon returning to the ship, all the crew members were treated of the radiation’s effect, except for Axon. The radiation reacted with a recessive Betazoid gene and he soon developed a Betazoid disease known as Rithectirosis.

The next year passed and Axon was approached to take his first Command. Without a second thought, Axon packed up his husband and his life and moved to the USS Odyssey.