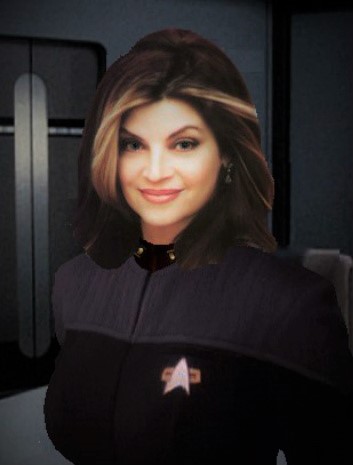 Her Vulcan abilities includes mind-meld and the Vulcan Nerve Pinch. She has the strength of a Vulcan. She can sometimes connect telepathically with a non-telepath, put a suggestion in a person's mind (TOS:The Omega Glory) and she can sense strong emotions such as fear, hate, anger, sadness, etc. She has had some training in the Betazoid way while she was serving on the USS Zhukov as Assistant Counselor.

As growing up, she noticed that her telepathic abilities were far more refined than those of Vulcans or Betazoids. Her dad learned to allow the human side of him to show but without giving up his Vulcan training. Her mother was full Betaoid and loved to talk telepathically. Her dad taught Deela in the Vulcan way. He felt that it was necessary for her future. He encouraged her to join Starfleet and her mother supported it as well. Deela graduated from school early. So at 16, she entered Starfleet Academy. She majored in Sciences and minored in Psychology. After graduating, she served on several ships.

In 2372, she felt that she was being lead to a Command position so she attended command school. Afterwards she was made XO and remained there until 2375, when she was finally given her own command. She’s had 4 commendations.

2377, she was engaged to a crewmember but he was killed when the Essex was boarded.

2380, she married Jim McNamara who was her XO until he died in 2385 by the hands of the Gorn. She has a son named Brandon T’Lar McNamara by him.

About one and a half years after Jim’s death, a Betazoid civilian writer came to be on her ship. They fell in love and were married with him taking her last name. They had together a little girl named Raivyn. He died later in a shuttle accident.