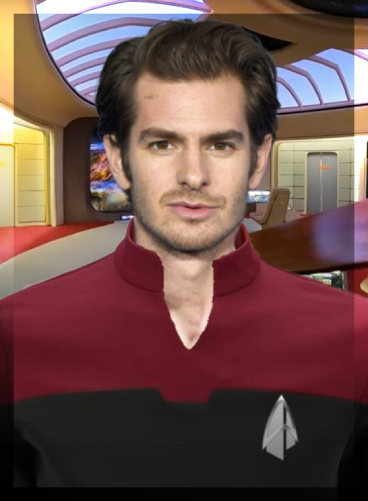 Ryker is a bit of a chatterbox, he likes to talk to people, get to know them or at least fill them with useless information to let them know he is there. He went through the Academy majoring only in Piloting. It was something he always enjoyed and always enjoyed getting behind the console that allowed him to control the direction of the ship. He recently graduated from the Academy and was elevated to the rank of Ensign, where all graduates normally start, and given his first assignment. His strengths is ability to learn very quickly, to adapt to situations and poker games. Weakness is talks too much sometimes, and poker games.

Ryker was born in Florida, Earth, to the parents of Henry Ryker and Lori Ryker. Over the years of growing up, he has had trouble making friends, being the quiet and shy type that he was. When he grew tired of being left out, he decided to change his attitude and made certain that he was known to everyone. Soon he developed the cheerful personality and blurting out random, useless information, basically starting small talk, just to make those around him notice that he was there.

What exactly made these personality changes? Camping trip. Around ten years old, his parents decided to take him onto a camping trip out in Colorado and on their third day, they went hiking up this large hill when Ryan missed his footing and fell a few feet, causing him to land and break his left arm. This immediately ended their camping trip and bringing him to the hospital, of course his arm was healed up and repaired with no trouble at all, he still had to stay a day to rest and let his arm finish healing. After which he realized that if it had gone any other way, he may not have survived. So he decided to be as lively and active as possible, to make as many friends as possible, to make people know that he existed and that he wasn’t going to away that easily.

So as soon as he returned to school, he started talking to random people, coming up with random things to say, starting small talk, just getting their attention. He’d even just pop right into a group of kids and just start talking. A lot of the times he’s annoyed people, few times he’s gotten into trouble, but on occasion he will get some attention, some laughs and some recognition.

In High School, he joined a football team and ended up playing as the quarterback. As the quarterback of course, he ended being popular with the girls. Course that never stopped him from starting useless small talks to get people’s attention but they’ve learned to deal with it since he was a star in their school. But there was one girl he had eyes on, one he very much wanted to get to know more than any other girl. Her name was Beth and eventually his charms won her over and he had spent the best High School years he had with her.

What got him wanting to join Starfleet though? It wasn’t just because of all the propaganda or advertisements or recruitment brochures that did it. No. It was his Father, who was a pilot himself, that got James wanting to join Starfleet for the same reason…to Pilot a Starship. Of course, James Father only piloted new toys around Earth, Lunar and Mars. But when ever James got the chance, his Father would set him down on his lap and show him the controls, teaching him everything he needed to know on how to Pilot like a champ.

So when James graduated from High School, Starfleet Academy was the next thing he went for. Beth also joined as well, but eventually over the courses and couple of years in the Academy, they knew that they would never be placed on the same ship and that long distances makes it difficult for everyone. So James did the right thing and broke it off, telling Beth that the last thing he would want to do is make her wait months or years before they could see each other again, to hold and love.

It was then his last year in the Academy that he met an interesting fellow, that went by the name of Vakai, a Romulan in Starfleet Academy. Of course they only had a few classes together, James felt it was interesting to see a Romulan in Starfleet, especially from what he’s learned about them. So, typically, James started some useless small talk to engage Vakai and get to know the guy. Sure it took him some effort, but eventually Vakai warmed up to him. It was in fact, the last few months on a Training Vessel when James and Vakai became friends. And after they rescued the rest of the crew and returned back to Starbase Bravo, they both graduated and got their assignments, along with the rest of their class of course…they didn’t really get advanced early just because of what happened on the Training Ship, but the event was certainly logged into their file.

During the Campaign, Ensign Ryker was the Pilot for the Delta Squad of a Hazard Team under Task Force 93. Their first mission led them to Meronia III after being dropped off by the USS Vesta. Upon arriving on the planet, Delta Squad’s first task was to eliminate the threat of D’Ghor Raiders that were trying to raid the colony. With training and patience, they were able to eliminate the D’Ghor raiders on the planet and use their transport to locate and land on a planet that had a D’Ghor Camp inside The Triangle. Unfortunately there was no vital information at the camp but his leader, Vakai, discovered that they had been sending large files to some where outside the system and once they had cleared the camp of D’Ghor Klingons, they took the transport and headed for the destination that the transmissions went to, only to find a D’Ghor Outpost. Once they arrived at the Outpost, they were able to devise a plan to eliminate their ability to use their communication systems, but they were also able to eliminate the Klingons on board, grab the intelligence that they hoped to be important, and steal one of the two D12’s that was docked at the station. They had also rigged the outpost’s reactor to overheat, and overload, causing the station to be completely destroyed, which the team was far away enough in the D12 from the blast.

(Reserved for the Finale)

After the Delta Squad’s efforts in gathering intelligence data from Hunters of D’Ghor’s own computers, the team all received promotions. The Non-Commissioned Officers in the team all rose one rank higher, as well as did Vakai and Ryker.