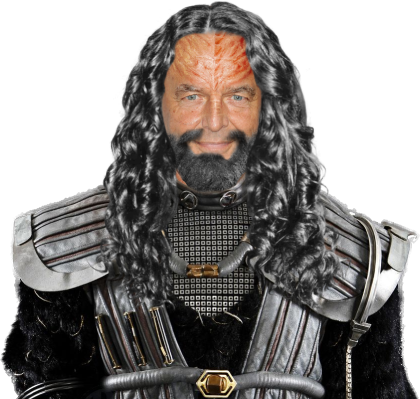 Vok is the Commanding Officer of a Klingon Raider Attack Wing. Vok has always believed that the alliance between the Empire and the Federation was a mistake, that the Klingons should be free to conquer anyone as they saw fit, to allow the Empire to continue to grow. Vok has taken his own initiative to get himself and his group prepared for more prominent targets. His first act is acquiring a much more powerful vessel to be his flagship but having an Attack Wing of three birds of prey, B'Rel classes, did have its advantages that he most enjoyed. Quick, nimble, and great in numbers, he has been able to lead many raids along the border. Now he seeks for larger targets and to make a name of himself in the New Empire....

When Vok was born, his parents knew that he would do great things. His father was Torek who served one of the great houses of the Empire. Vok though had no idea who his mother was as she was gone the moment he could remember. If he tried hard enough, he could see her face when he was just an infant in her arms, but that was all he knew. A Face. His father refused to speak of who she was until he reached of age.

Moment Vok could walk on his two feet, his father trained him. He would first be made to run to the market or run to his classes, anywhere Vok was sent or wanted to go, his father wanted him to never walk. As he grew older, the more Vok ended up doing. He soon learned how to hunt for food, how to carry, skin, carve and cook his food. Then Torek began to teach and instruct Vok on how to use every single weapon in the Klingons arsenal. Assassin Knives, Daggers, blades, all of them. How to use them, when to use them, and the meaning of using them. When it came down to it, Torek would make Vok fight him with each weapon until Vok mastered them and was able to cut his father; first with the D’k tahg, then the Bat’leth, the Gin’Tak, the Kligat, and the Mek’leth. Other blades that meant for assassinations and ceremonial he still learned about and how to use, but they were not meant for hand to hand combat. Nevertheless, Torek still taught Vok how to use them in case he was forced into hand to hand combat with those weapons. Of course, Torek taught Vok how to use a standard Klingon Disruptor Pistol, following with the rifle attachment that made it more stable, with added beam option and extra power capacity as well as a scope attachment for marksmanship. Then there came the stolen weapons from other empires, like the Romulans, Federation, Ferengi, etc.

When they were not learning about weapons and how to use them, Torek was teaching Vok about strategy and what it means to be a leader. Torek told Vok that being a leader carried a lot of weight, responsibility but it also gave a lot of strength and honor. Torek explained that throughout Klingon history, there is nothing more honorable than being the leader who leads warriors into glorious combat and being victorious. Torek then moved on to ship vessels, classifications, schematics, weapons, and so much more. Every. Single. Day. Vok was learning. The only thing Vok hated the most, one of his weaknesses, was sitting around so much and not doing anything. He loved the feeling of having a weapon in his hand, he enjoyed hunting, and carving into the animal. And the more this carried on, the more impatient Vok became but his father was no fool, when he knew Vok needed to do more, they did combat drills and hunted together.

When Vok finally became of age, Torek told everything Vok needed to know about his mother, why she left, why Vok was being molded into this warrior. Torek explained that the Klingon High Council had betrayed the true ways of the Klingon Empire. That allying with the Federation was a mistake. He said, when the Klingons allied themselves with the Romulans, the alliance crumbled very soon after because the Klingons are territorial. They need to expand, they need to conquer, and they need to taste the blood of their enemies. The alliance with the Federation had lasted for far too long, and once that alliance had been demolished before…but because of the Dominion and Captain Sisko, the alliance was restored. It was a mistake. Few houses had tried to disrupt relations, to break the alliance apart, but they had failed. Torek told Vok, that he was the son of Lursa, one of the most brilliant, beautiful and honorable of all Duras but the knowledge of this was a secret and for good reason as the Duras is long gone, that Vok is nothing but a remnant of the one true great house.

Then that became another thing that Vok disliked the most, another weakness of his. He vowed that if he met anyone who supported the downfall of his mother and her great house, are nothing but dishonorable petaQ and he will focus on nothing else but that person, and destroy them. Not just kill them…but annihilate everything they love and dear then kill them. But Torek explained to Vok that he needed to proceed carefully and tactfully. That he needed to be smart and quiet. So, Vok went through the Klingon Academy, took his posting when assigned and did his time until…the time was right. But even then, he slowly began to spread the stories, to bring warriors to his side.

When Vok became First Officer on one of the B’Rel Class vessels, he slowly began to spread his stories amongst the crew, and his numbers grew over time, until that time was perfect for him to challenge the Captain for command of the ship. Being skilled with the D’k tahg, it was no effort for Vok to slay his Captain and take his place. As soon as the word spread that Vok had achieved his first goal, command of a warship, it did not take long for two more B’Rels to join him into his very own Attack Wing. And that…was when Vok and his warriors went dark, to form a plan, a plan to make his house, House of Vok, grow into a formidable power against the Klingon Defense Force. When Vok learned of the Hunters of D’Ghor and the chaos they were causing in The Triangle, he took that opportunity to keep a very close eye on both Starfleet, and KDF. Vok even managed to convince a few Klingon Intelligence Officers in the Klingon Intelligence Agency, who worked in the shadows and passed information to him, information that was not only important but also vital to his plans for the future.

When he finally got the intel he needed, Klingon Defense Force sending a Vorcha Attack Cruiser, that had half the normal crew capacity and was due to receive more in less than a week, to aid Starfleet against the Hunters of D’Ghor, and a Starfleet ship, alone and easily capturable at the same time…Vok rose his warriors from the dark and took action. First the attack on a Starfleet Training Vessel and captured it, transported its crew to a habitable planet and used it as a decoy ‘escort’ vessel for the Vorcha, IKS Shadriq, before taking out a vital power node to their primary defense systems and took out the Captain in the very same challenge that won him the command of the B’rel he served on. Course he did that after telling the entire crew of who he was and what his plans were, then transferred his flagship from the B’rel to the Vorcha and renamed it the Redemption. Soon, Vok will continue to the next phase of his plan.

((Currently no one is interested in a random Klingon group doing their own thing, so am contemplating on re-writing Vok.))