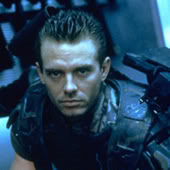 Adam was born into a police family. His grandfather had been a Gunnery Sergeant in the Marine Corps as an MP. His father had gone straight to the LAPD academy immediately after graduating high school. He eventually became the Chief of Police. Adam was the oldest of three children and became known to the family as the ‘little detective’. He was always searching for his younger brother and sister’s missing toys. Later as he and his siblings grew older he would catch his sister boyfriends up in various lies, which made him rather unpopular with his sister. When he turned eighteen he entered the Starfleet Academy Marine Program and majored in Intelligence.

While in the Academy, Adam was on the football team as a running back. He received several injuries, usually two or three each season. He seemed to always be treated by the same intern and her work supervised by whatever doctor was on duty. After this happening numerous times Adam finally laughed one time and asked her out. The pair dated through the rest of his time at the Academy until after he graduated.

Six months after graduating the Academy he is abducted on his way to work at Starfleet Intelligence where he worked as a Marine Liaison. He finds himself in a classified mission where he is cut off from his entire family and friends for the duration of the assignment. Almost four years after being abducted he is reassigned, returned to Starfleet Medical for evaluation and debriefing. He is cleared to return to duty and reports to his next assignment.