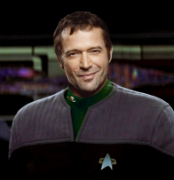 Fane looks much younger than what he actually is. He has led a life that has not scarred him up too bad however he is one of those Colonel's that does get his hands dirty. His hair is still stubbornly dark with no affect of aging yet to be on him.

Fane is distant relative to Shane McColm.  The Enedrial is a large family but they have tended to leave the McColm family or what there is of it out of anything that they do.  Only Fane has anything to do with his cousin.

Fane was a Colonel before his retirement from the Marine Corps and commanded the USS Thunderchild in the Gamma Quadrant.

He left to move to New Bajor where his new wife lives.  She is expecting their first child