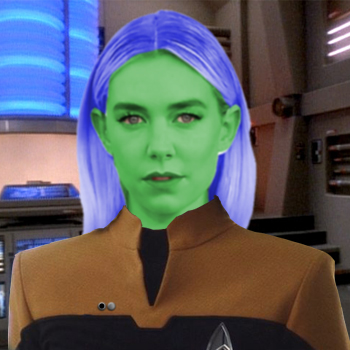 Lesu serves as the Assistant Chief Engineer on the USS Avenger. Her time on the ship has been brief, but after a long and hard upbringing she uses the strength and unwavering courage to succeed.

Lesu did not have an easy life before joining Starfleet. Her life has been a struggle from a young age.

Lesu was born on Rigel VIIII in the midst of the turmoil of the Orion Syndicate. Lesu was born the only child in her family. When she was only four her family was captured and taken into the Syndicate as slaves. Her family had never been the richest nor the most popular, but to be a slave was the worst thing that could happen.

Lesu from a young age served one of the top bosses in the Syndicate. The man was impulsive, reckless, and abusive to all of his slaves. Well almost all of his slaves, though Lesu hated the man he always treated her like his daughter. Lesu was the best slave the boss ever had even though he himself said it. The boss was Riktov, the purveyor of Orion Finance. Riktov traveled around the Syndicate way more than most.

Through the years Lesu had learned patience and though she was usually very patient the wrong word or action could throw her temper into a huge spiral. Lesu was a well respected person on Riktovs ship, but she also was feared. Lesu knew how

to walk the line, but she could also be a snake in the shadows. The Syndicate could never be trusted in Lesu’s mind nor would she trust them.

The years were long and weary and as her parents’ health began to falter she took it on herself to care for them, but even with the best care she could give them they passed.

Stricken by grief she locked herself in her quarters and left her duties. Rictov learned of her problem and made her one of his top cooks, as she had cooked many meals for him. She gained a reputation on his ship and her meals were talked about on the ship and among higher ups when they came and visited the particular boss. As the years continued Rictov decided to make Lesu part of his crew. Lesu never denied the position, but regardless of that fact she never enjoyed working under the man who had enslaved her family. Lesu had a reputation, finally one that was respected and feared. She had the ear of Rictov, but she never used it.

She continued her duties never pushing for more or treating people differently though she had the respect she stayed humble and worked to help everyone. Some of which were not in the bosses good graces.

When Lesu was around 15 the ship on which she spent her childhood was attacked by the Federation who were coming to free slaves. After a long siege between the two ships the boss surrendered handing over all his slaves including Lesu. The rescue changed her outlook and her life path.

After spending many months on the Federation ship she realized she wanted to join something greater than herself. She learned what she could in the small time and began to make friends with many of the crew aboard the ship. After a small conversation with the Captain it was decided she would apply to Starfleet Academy.

Lesu studied hard for the Academy entrance exam. It was not easy, as she had not had the same life as everyone else, her outlook on the world and what she knew was limited from the standpoint of the Federation. She devoted all of her free time to studying what she did not understand. She had a fond love for Intelligence from each book she would read to the information she gathered in her research.

Lesu was brought in to live with the Commander of the ship she had been rescued by after a brief time on a space station. She had thought she was stranded, but the Commander had become very fond of her. Lesu became an unofficial member of the USS Resonance. She worked hard to learn the ins and outs of the ship.

She realized as she was getting older more people were coming to her in a romantic manner. She promptly denied any advances by anyone and set herself to make sure she passed the entrance exam.

At the age of 17 she went and asked the Commander who she felt like was a second dad to her if she was ready for the exam. He never answered, but he approved of her to take it. She passed the test and was accepted into the prestigious ranks of Starfleet Academy.

Her time from her childhood made this experience different and somewhat difficult, but she decided nothing was going to stop her. She worked through each class with a tenacity and drive that nothing could stop her.

Each year in the Academy proved to be more and more difficult, but with all the hard work and dedication she knew she would pass. Her time at the Academy afforded her some friends and a love for martial arts. She became an assistant to instruct in the class after she excelled at the class.

She quickly rose the ranks among cadets and became one of the respected martial artists in the Academy. She had many instructors, but she became a friend of Jana Lee Dixon. She was one of the instructors that’s seemed to understand Lesu’s drive.

After a long and hard four years she graduated at the top 5% of her class. She never would have believed it. She wasn’t sure what her future held in Starfleet, but she knew great things could happen if she continued to strive to do her best.

She was transferred to the USS Dover and placed in the Engineering department. She was the rookie and got told on multiple occasions she was one. Lesu worked hard to prove herself. She kept to herself and did her job, as such she wasn’t well known to the rest of the crew. She was an Ensign for a small amount of time before her quick thinking helped save the ship and crew from ultimate demise. She was promoted to Lieutenant JG and asked to transfer to the USS Avenger. The ship had a small crew and she was asked to join the crew to help the Engineering crew. Her appointment came with the position of Assistant Chief of Engineering.