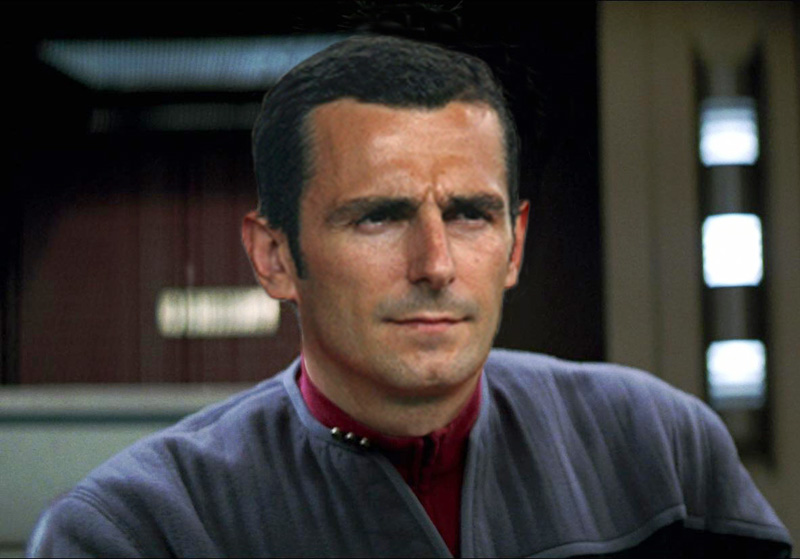 Intense and very focused. Sam loves conflict, and sometimes goes out of his way to incite an argument or a fight. Very skilled at multiple forms of hand-to-hand combat, he has never been seriously injured in a bar fight, though he has sent more than his share of people to the infirmary. He has a very dry and sarcastic sense of humor. He loves the good life, loves to drink, and loves the company of women. Often betrayed while living on the colony of New Glasgow, he does not trust easily, and can betray someone he does not trust. Though once his trust and friendship has been earned, he will remain a loyal friend to the end.

Sam Aubrey started his adult life on the fringe. A rebellious youth on the harsh colony world of New Glasgow, he was notorious for getting into fights and brawls with people of all ages and species.

Raised by a mother who worked in a comfort house and by a violent stepfather, Sam was regularly beaten as a child. When he was 12, he watched his stepfather brutally beat his mother to death, before the man sold the young boy to a comfort house. There, Sam was abused constantly for three years, before escaping and coming across a Bolian freighter captain by the name of Boralan. The Bolian took him under his wing, and taught him how to be a pilot.

Sam revealed himself to be a pilot of exceptional skills, and soon found himself as part of the crew of the Rising Star, a freighter / smuggler operating out of the Rigellian system, serving as the ship’s pilot. He was with the ship for seven years, performing duties both legal and illicit. It was as a member of the crew that he met the woman who would become his daughter’s mother, a fellow crew member aboard the Rising Star.

Sam was arrested while the Rising Star was carrying out one of the more dangerous missions, smuggling biomimetic gel to a group of Nausicaan mercenaries operating near the Romulan Neutral Zone. During the arrest, Sam’s girlfriend Allison was killed by an undercover operative working for the Nausicaans, and Sam was knocked unconscious. He was arrested and sent to the Federation Penal Colony on Titan, where he served a sentence of four years.

As retaliation for what the Orion Syndicate perceived as a failure on the part of the Rising Star, the families of the freighter’s crewmembers were killed, including Sam’s sister. His infant daughter, Claire, was rescued by an El-Aurian neighbor who had taken Sam under his wing, and who provided occasional guidance to the young man. The girl was taken to Earth, where she was raised by a foster family. She has rejected all of Sam’s attempts at contact and reconciliation.

Intensive counselling and strong role models at the penal colony helped Sam reform, and upon his release and pardon, he applied for Starfleet Academy, intent on making amends and putting his piloting skills to good use.

He served as a cargo shuttle pilot at the Alpha Centauri shipyards, earning praise from his commanding officers for his skills at piloting through complex maneuvers and handling sensitive cargo. He earned a transfer to a deep-space assignment on the USS Faragut, and eventually landed the position of Chief Flight Control Officer on the USS Republic. He served for eighteen months on the USS Republic, until the ship hit a cloaked gravitic mine left over from the Dominion War. Sam was seriously injured in the incident, as a collapsed support beam from the Bridge impaled him in the left shoulder. He nonetheless managed to navigate the ship away from the minefield, and using only thrusters, was able to limp back to Starbase Thirty-Six. He earned a purple heart, as well as a medal of valor. His arm had to be replaced with a cloned limb, and he spent eight months in physical therapy.

He was then posted to the Excalibur-class USS Scorpio, returning to active service . The ship served in the Gamma Quadrant for a short period, where Sam continued to rise through the ranks, eventually making his way up to First Officer.