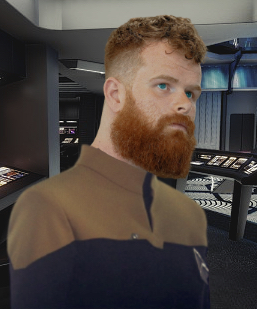 Recently graduated from Starfleet Academy, Finn has been assigned to the USS Galahad as an Engineering Officer.

Fionnlagh “Finn” MacDiarmaid was the second child born to Aileen and Callum MacDiarmaid on the 23rd May 2377 in Dunoon, Scotland. He was raised alongside his brother Alasdair, who was two years his senior, in the family home on Marine Parade, near McInroy’s Point. His brother took after their mother, a marine biologist, and often accompanied her on field trips. Finn’s interest was not in science, but rather the myriad of instruments that were used to analyze the samples. Their father was a maintenance engineer and Finn loved to follow him around, asking about the workings of whatever equipment was being fixed or replaced.

The family were avid hillwalkers and could often be found hiking through the Trossachs or climbing the nearby Beinn Mhòr. Alasdair liked to track and record the wildlife that they came across whereas Finn liked to find uses for whatever gadget he’d been tinkering with recently. They’d occasionally squabble when Finn insisted that Alasdair use one of his gadgets to track the wildlife, only to keep taking it back to make enhancements to it.

Throughout school, Finn performed well academically but didn’t engage much with others socially due to his introverted personality. Under pressure from their parents, Alasdair was often told to take Finn along to social events and so most people at the school knew him as Alasdair’s brother. They finally relented when Finn brought home his first girlfriend, Fiona, although in reality it had been her who had made the first move and she effectively took over from Alasdair in encouraging Finn to be social.

Their relationship lasted only two years as Fiona’s father was a Starfleet officer and transferred to a long-range exploration vessel. Fiona and her mother also relocated to the ship because the next mission would take far from Earth for at least four years. Fiona’s father brought Finn along when the family toured the ship and even arranged for a more in-depth tour of engineering for Finn, knowing he’d be impressed by the state-of-the-art technology that had been installed during the refit.

It was that tour that kindled Finn’s interest in Starfleet and so he applied to Starfleet Academy on graduation from high school.

Finn enrolled in the Academy after the summer of 2395, choosing to specialize in Engineering. He found that he had a lot in common with the other Engineering cadets and for the first time in his life, felt that he ‘fit in’ with his peer group. The Academy classes were designed to make cadets work together, to make them depend on each other, and to build trust and camaraderie between them. Engaging socially hadn’t come naturally to Finn before, but it was interwoven with everything else in Academy life and so his social skills developed without him realizing that it was part of the training.

The best performing cadets were often rewarded with training cruises, when they’d get to handle a real starship, albeit an older smaller one and under supervision. These drove Finn to push himself and by his senior year, he managed to land the (acting) Chief Engineer position on a training cruise.

He graduated in 2399, ninth in his class, but the highest with an Engineering specialization and the second-highest human.